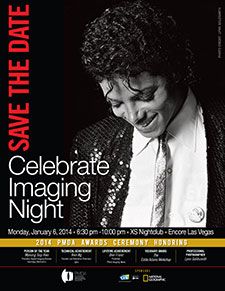 The event featured a performance by Sony Music artists A Great Big World, an incredible photography exhibit by rock and roll photographer Lynn Goldsmith, and a touching tribute to the Eddie Adams Workshop.

The evening began with Mike Kahn, PMDA’s president, introducing A Great Big World, who dazzled the audience with their inspiring selection of ballads, including their hit, “Say Something.”

The crowd of more than 200 executives, dealers and guests were treated to presentations that shined the spotlight on the imaging industry. Claudia Malley, executive vice president and worldwide publisher of National Geographic Global Media, which has sponsored the event for more than 20 years, presented a compelling 10-minute video of outstanding photojournalism; then Matt Sweetwood, a board member of the Josephine Herrick Project, introduced an inspiring video on the potential of photography to heal those with emotional and physical challenges.

Ren Ng, founder of Lytro, Inc., was then presented the Herbert Keppler Technical Achievement Award for Lytro’s consumer light field cameras. This was followed by Kahn’s presentation to Don Franz as the Norman Lipton Lifetime Achievement Award winner for his dedication to promoting and enhancing the printing and output segment.

PMDA’s executive director, Jerry Grossman, was slated to bestow the Professional Photographer Award to Lynn Goldsmith, but arctic weather in the Northeast prevented him from attending. After receiving the award, Goldsmith presented a selection of her lifetime work of rock and roll portraits, along with engaging stories of the personalities behind the photos—all featured in her new book, Rock and Roll Stories. Her work was also displayed in the halls of XS.

The Eddie Adams Workshop was then honored with the PMDA Visionary Award for its more than 25 years of inspiring new photographers through the innovative annual retreat. After a moving presentation featuring the achievements of the late Eddie Adams, Bill Pakela of Nikon, the workshop’s sponsor, accepted the award. Pakela gave a heartfelt speech on behalf of Adams’s widow and the program’s cocreator, Alyssa Adams, who also was prevented from attending due to the weather.

The prestigious PMDA Person of the Year Award was then presented by Mike Kahn to Myoung Sup Han, president of the Digital Imaging division of Samsung Electronics. Han sincerely thanked PMDA’s board and the industry, also paying tribute to the many in Samsung who made it possible.

Kudos to the event’s committee, including Michelle Tramantano, whose travel plans were also a victim of the weather. If the gala event’s objective was to inspire the industry, it lived up to that. The crowd was treated to an entertaining evening of music, photography, inspiration and appreciation for the accomplishments of this year’s winners. pmda.com