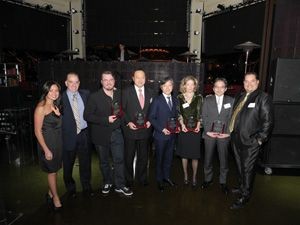 Las Vegas, NV—The PhotoImaging Manufacturers and Distributors Association held its 47th Annual Awards Dinner on January 7, 2013 at the XS Nightclub at Encore, bestowing their prestigious awards on six leaders of the industry. Chris Johns, the editor in chief of National Geographic magazine, was awarded the industry’s highest honor, the 2013 Person of the Year.

The gala event began with a special appearance by Sony recording artists Walk of the Earth, whose incredible harmonies and musicianship delighted the 200 enthusiastic attendees. Their eclectic set was followed by a welcoming address presented by Sony’s Mike Kahn, PMDA’s new president, who reviewed the PMDA’s mission and achievements, while imploring the industry “to continue to work together to achieve great things.”

Kahn then welcomed PMDA’s executive director, Jerry Grossman, to the stage, who presented the first honor to outgoing PMDA president Joellyn Gray of Fujifilm. Gray had been president for the last three years, and Grossman lauded her “significant achievements in leading this powerful industry organization.”

PMA’s executive director, Jim Esp, then gave the PMA/DIMA Lifetime Achievement Award to legendary photo dealer Ron Inkley. “It is truly an honor for me to present Ron Inkley with this much-deserved recognition of a lifetime dedicated to growing and serving the imaging industry,” he said. Unfortunately, Ron Inkley could not make the trip to Vegas due to the flu, and his son and business partner, Mat Inkley, proudly accepted the award for him.

Following this, Grossman spoke about PMDA’s Portraits of Love program, which, with the cooperation of the USO, has organized photo shoots of military families to send to active military personnel for the last four years. He then asked photographer Rick Gerrity to come to the stage; Gerrity talked about his experiences as a photographer traveling more than 1,200 miles to Gulfport, Mississippi, to be a part of the program. Gerrity showed inspirational photographs of military children that were sent to their parents around the world, thanks to this important program.

Other important awards bestowed during the evening included: the Herbert Keppler Technical Achievement Award, which was given to Morio Ono, president and CEO of Tamron; the Visionary Award was presented to Teruo Hirayama from Sony, who developed the back-illuminated image sensor; and the Norman Lipton PMDA Lifetime Achievement Award was awarded posthumously to Michihiro Yamaki, the founder and former CEO of Sigma who passed away in January 2012. This award was accepted by his son, Kazuto Yamaki, after a moving video tribute to his father’s life’s work.

Highlighting the event was an impressive showing of the work of Vincent Laforet, the 2013 Photographer of the Year. A Pulitzer Prize-winning photojournalist and director, Laforet spoke of the power of the image and showed a video that encompassed both his still and video accomplishments. A display of Laforet’s work also adorned the XS Nightclub.

The evening ended with the presentation of the prestigious Person of the Year Award, given to Kathy Moran on behalf of Chris Johns, who was unable to make the trip. Moran treated the crowd to a National Geographic video that demonstrated the power that new technology has brought us in capturing images only once imagined.

Mike Kahn ended PMDA’s Imaging Night by thanking the attendees for once again shining the light on the important contributions made by the photo-imaging industry. pmda.com