Students going back to school—middle school, high school, college—are going with smartphones, and there’s not a lot you can do about that.

They won’t be buying point-and-shoot, mirrorless or DSLR cameras for themselves. Neither are their parents sending them off to class with cameras. And if some of those students are going to take photography courses, the school will provide the cameras.

But maybe some of those schools can get those cameras from you.

Either way, he says, “It’s a finite window.” But he adds that school sales are a nice pickup for him. “We do reasonably well with it.”

Jon Liss, with four National Camera Exchange locations in Minnesota, does well in school sales, too, but not with digital cameras. “We have a big arts community in the area,” he says, and he reaches it with used film cameras.

“K1000s, AE-1s, cameras like that. A few times a year we sell a bunch of them [to schools]. We recently sold 20 K1000s with 50mm lenses to a school in California, and a lot in the cities here. Some photo courses are going digital, but a lot stay with film for the intro and basic classes. And they need to supply the kids taking the courses.” 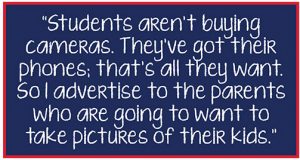 Which means he’s constantly on the lookout for vintage cameras. People come in with them, and sometimes National gets them as part of estate sales. Word of mouth and the shop’s reputation help with that.

Gregg Burger at Precision Camera & Video in Austin, Texas, finds some success after the back-to-school season.

“Back-to-school promos in their old incarnation are not being done to any extent in the photo industry,” he says. “I’m in a college town, and I’ve tried advertising in the college paper, but students aren’t buying cameras. They’ve got their phones, and that’s all they want.

“So what I do is, about a month after school is in, I start advertising to the parents. They’re the ones who are going to want to buy cameras with real lenses to take pictures of their kids playing sports or cheerleading. That’s who I target.”

Burger reaches that market through e-mail and TV and radio advertising. “Moms in cars are likely to listen to radio stations while driving their kids to school. I target a couple of local stations, and that seems to work out pretty well.”

Mike Worswick, at Wolfe’s, aims at that market both earlier and later than back-to-school time.

“In August we run a summer clearance sale, and one of the subtexts will be photo gear for back-to-school and fall sports photography of your kids, but it’s subtext, not a primary theme. Then in early fall we try an educational approach and say to parents, ‘Come to our sports photo class. We’ll teach you to make better pictures of your kids cheering, dancing, playing football at night . . .’ So we try to approach the school business from those angles.”

Kevin Harayda at Dan’s Camera City, in Allentown, Pennsylvania, focuses on services for schools. “We do a lot of school photos, a lot of image capture in September. We go to the schools, do the photos, do the output . . . the full gamut.”

He says he might be doing more to promote directly to parents and kids, but as other dealers also mentioned, he can’t get the products to promote because the Kumamoto earthquakes this past April damaged a Sony sensor production factory.

“There’s not much product to promote,” Harayda says. Some manufacturers have been “much more conservative on their promotions—they’re running some rebates because they’ve conditioned customers [to that], but the inventories are difficult to get. I don’t see them doing a lot at this point to really generate excitement. Maybe in September things will start to kind of right themselves.”

In any case, traditional back-to-school promotions aren’t likely to be big successes for photo retailers. But for retailers who expand their view from back-to-school to schools-and-students, the window of opportunity might open up a bit.