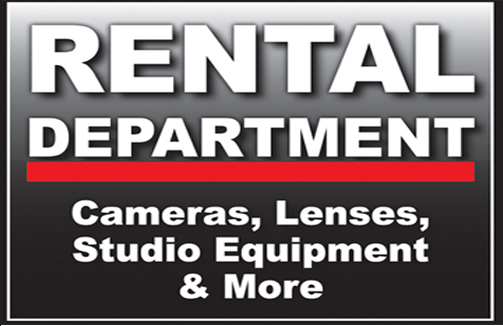 When I talk about camera equipment rental with Stephen Weiss, president and CEO of Creve Coeur Camera in Missouri, we start out in that direction, then take a detour.

“I was at a friend’s wedding,” Weiss says, “and the photographer was running around using a Gary Fong [flash diffuser], and was incorrectly using it. She had it at an angle where she was wasting flash power outdoors and creating a line when she used it indoors because of the angle. So I said something to her. Later on I suggested, ‘There’s a magnificent sunset, why don’t you take the bride outside?’ She gave me a stare. It was one of those ‘You gotta be outside’ shots, and she missed it.”

What’s the connection to rentals? In Weiss’s case, it’s education.

A recent addition to CCC’s 18,000-square-foot main store in Creve Coeur—they have nine locations in Missouri and Illinois—is a 25×25 “all inclusive” rental studio. For a reasonable fee an enthusiast, weekend warrior or Gary Fong misuser can not only rent the studio and all the gear that comes with it, but also have one of the store’s pro-shooter staffers teach him or her what he or she needs to know.

Promoted by flyers, e-mail, brochures and an appearance on the store’s Facebook page, the studio opened in early February. “It’s rented about 30% of the time, but we’re getting a lot of interest—people just keep asking about it,” Weiss says. “The fee is $60 for the first hour and $50 for the second, but right now we’re doing bogo.” 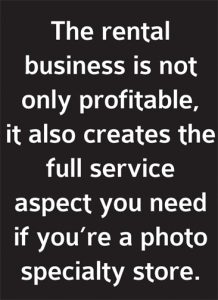 The fee brings anything a customer might need or want. “We have Panasonic 4K video cameras and Panasonic still cameras,” Weiss says. “Panasonic helped sponsor the studio; they gave us some of the equipment. We have Manfrotto LED and Westcott constant lights, three basic wall setups and the option of using seamless. It’s all there, whatever they want to use, or they can bring their own gear.”

Photographers can shoot tabletop setups, bring in models, shoot videos. “We had a minister do a video and a band shoot stills,” Weiss says. “We also teach classes in the studio. It’s multipurpose.”

Creve Coeur offers a lineup of standard rental items available for pickup at any of their stores; they don’t ship. “About two-thirds of our rentals are for lenses,” Weiss says, “and it’s not only pros renting them. It’s the whole gamut from enthusiasts to wannabees to professionals.” That gamut includes enthusiasts checking out DSLRs before buying. “And people are starting to rent our mirrorless cameras, too.”

Most of the renters at Norman Camera’s two locations in Michigan are enthusiasts giving DSLRs and lenses test runs. “Probably only 20% of our customers are professionals,” says the company’s vice president, Chris Norman. Then he adds, “But it’s kind of hard to define who’s a professional these days. So maybe 20% is low because some of these enthusiasts are actually selling their work and using some of this equipment to help do that.”

Norman Camera also doesn’t ship. “There are a number of companies that do rental shipping really well,” Norman says, “but our primary goal for rental equipment was to increase foot traffic into the retail stores.”

He says they’ve been giving rentals a “concerted effort” for about three years—“promoting it more, having it out in the stores and having the sales staff talk about it and being proactive.”

I’m thinking that “talk about it” might mean suggesting, especially to a customer who’s been in the store awhile and can’t seem to make up his mind, that a weekend rental might be a good idea. But Norman explains, “No, not that. The reality is, the longer a customer stays in the store, the better our chances of making a sale. Our approach is that the rental is an add-on. As our people are selling a camera to a new DSLR user, they mention the idea and point out the lens displays, which are pretty overwhelming with 40 or 50 different lenses. They’ll say, ‘You know, we do rent a lot of these lenses for special occasions.’ It’s brought up as an added value [to the store’s services].”

An additional added value is price. “Our rental rates are comparable to what the larger rental outfits charge,” Norman says. “So our customers can put their hands on a $5,000 super telephoto lens and it isn’t going to cost them a ton.” Norman Camera offers one-day, three-day and weekly rentals, with single days comprising the bulk of the business. “The one-day rate includes picking it up on Saturday and returning it on Monday,” adds Norman. “That’s when people most want to have the equipment—for the weekend.”

Lenses are the most rented gear, telephotos most of all. “Our number one is probably a 300mm f/2.8 lens,” Norman says. “I think they’re going for sports; this is a big sports area.”

Chris Norman had no doubt that rentals help lead to sales, and there’s a definite cycle to moving gear into and out of rental. “As long as a lens looks new,” he says, “we leave it in the pool. Once it gets worn, we sell it as used. For the cameras, we try to keep just the current lines available and sell them off as used when the manufacturer discontinues them.”

The biggest part of the business for Bruce Pallman, who runs Roberts Camera in Indianapolis, are pros who need a specific piece of equipment for a specific job, though the store also does well with consumers looking to try out gear before buying.

It’s lenses or camera bodies most of the time for the try-out gang. “The camera body is along the lines of, ‘I want to try it for a weekend to see if it’s going to do what I want it to do,’” Pallman says. “And a weekend’s enough because usually they’ve made you nuts in the store for a month prior to that.”

Lighting gear does pretty well for Roberts. “Profoto lighting equipment is good to have, the new Phottix stuff from the MAC Group is great stuff to have in rental; it has a unique trigger system and everything is integrated. You’re better off having the new stuff and selling off the old [when it comes to lighting].”

He points out that he doesn’t follow the “put it in rental and never take it out” theory, preferring to find out what rents and what doesn’t, and pulling out the latter before too long. “We try to rotate our rental equipment that way, finding what the good stuff is and not putting money into stuff that didn’t rent. If I have a 15mm fisheye that rented twice in a year. I’ll get it out of rental, sell it as a used piece and not replace it.”

That’s a key part of the formula for a successful rental department. Another part is listening to your customers. “They’ll be asking for what they need and want,” Pallman says.

Roberts ends up renting mostly Canon and Nikon camera bodies and is doing some business in mirrorless camera rentals. Pallman mentions Panasonic and Olympus in that category, along with a few of the higher end lenses for those bodies. In general, as with other dealers, body rental is a DSLR business.

Video is also a viable category. “We get the weekend wedding videographer, the working guy who can’t afford a $6,000 camera.”

Although Roberts will ship rental gear, Pallman says the demand for shipping has slacked off because of the online rentals of LensRentals.com and BorrowLenses.com. They’re inexpensive, Pallman says, and “they do a fantastic job. So for people like us, the rental business has relegated itself to the ‘I need it right now’ customer at the local level.”

Pallman echoes other dealers when he says the rental business is not only profitable, it also serves to “create the full service aspect you need if you’re a photo specialty store.”

And it’s steady. “It’s a big repeat business, especially from the pros. During football season, all my long lenses are out every weekend.”

I wasn’t able to speak with a representative of BorrowLenses—a couple of requests produced no results by deadline—but a visit to their website showcases their appeal: major brands in still and video gear, wide selection, shipping direct to the customer or to a pickup location. They also offer gear in “photography packages” from major suppliers. Pick an area of interest (like beginner landscape, head-shot portrait, travel sports), and they’ll send the essentials for that specialty. It struck me as an idea a specialty dealer might adapt or adopt.

LensRentals offers rentals within several systems and formats, plus the option of a subscription plan that provides reduced shipping rates in return for a $79 yearly membership.

Speaking of memberships, it’s worth passing along something that Bruce Pallman mentioned. “I saw a really interesting concept. I don’t remember the name of the company, but there’s a start-up that works off a monthly club rate. It’s like $149 a month and you rent whatever you want for an unlimited time, and they pay the freight back and forth. It’s the most unsustainable thing I’ve ever seen, but it could take off.”

His implied message: strengthen your rental department. All sorts of interesting ideas are in the air.