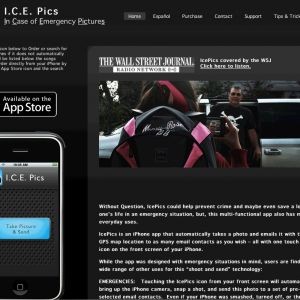 Parents now can learn precisely where their child or teenager is at any moment by calling them and asking them to take a picture using the new iPhone app called IcePics (In Case of Emergency Pictures) www.IcePics.com.

IcePics primary purpose is to assist anyone who suspects they are about to become a victim of kidnapping, rape, robbery or assault by having then simply point their iPhone at the suspicious person and push the IcePics button on their iPhone. IcePics will immediately email a picture of the bad guy along with the GPS location pinpointed on a Google Map to contacts pre-selected by the owner.

The creators of the app also ad that a wonderful secondary use of IcePics is to confirm the location of your teen or child with the Google Map  sent to your email along with the photo. After downloading IcePics for only $2.99, the user simply enters email addresses of as many contacts as they wish. That information is saved for use whenever the owner is being approached by a suspicious person.

Even if the perpetrator smashes the phone, the photo is already gone from the iPhone and has been sent to the pre-selected emails.

“A person with ill intent, such as a child-napper, mugger or rapist, will almost certainly abandon their plans because the chance of them being caught is almost assured,” says Jeff Neumeyer, developer of IcePics. “IcePics can actually prevent a crime from happening as opposed to a great program like Amber Alert which is activated after a child is abducted or reported missing. IcePics could be the most important app written for the iPhone because it can save lives today.”

“This application assumes you have limited time or maybe even limited motor function to pull anything off quickly,” says Jerard Hill, host of The Daily App Show.

“IcePics does it quick and then it’s going to send an email alerting the recipient with the image you just took along with the coordinates so they can find us … IcePics is a great way to take advantage of what the iPhone has to offer to perhaps save you or someone that you love in a dangerous situation.”

Because the photo can be taken silently, without the camera click sound, a user can press the IcePics icon button and use the few seconds that it takes for the phone’s camera to auto-focus, to hold the phone up to their ear and position it for a picture of the suspect without alerting them or offending them. “Since the email recipients are selected in advance there’s no fumbling with who’s going to get the email of the photos,” says Neumeyer, “the photos and location are on their way automatically.”

“A suspicious person could range from someone who just gives you the creeps to someone whose behavior causes you to fear they may be intending to commit a crime, whether it’s theft, violence or even terrorism,” adds Neumeyer.

Even if a person does not have an iPhone, or doesn’t purchase IcePics, once criminals become aware of the app they will flee when any phone is aimed at them. Most criminals will not stop and second guess whether or not someone actually has an iPhone equipped with IcePics.

“People are also finding other uses for IcePics,” says Neumeyer. “A couple of real estate agents suggested a way they’ll use it and a hiker told me he could have use IcePics to send his location when he was lost in the woods. He had no way telling anyone where he was. And some college students intend to use IcePics to keep family and friends in the loop on their vacation across Europe.”

To learn more about this app, or to purchase IcePics go to www.IcePics.com.