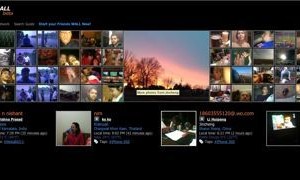 photoWALL, a new online showcase of mobile devices, real-time web technology and user-generated content, recently announced it is now available to all Palm Pre and Palm Pixi customers worldwide as a free download in the Palm Beta App Catalog.

In the initial two weeks since the Palm test launch, the site claims that over 15,000 Palm Pre users have downloaded and used photoWALL.

“We are excited to be the first free live photo uploading application available in the Palm Beta App Catalog,” said CEO Mark Haverkate. “It's fun to see so many live mobile photos coming in from all over the world, and fantastic that the launch of Palm Pixi will bring photoWALL to a whole new group of users.”

By using a family name, group, team, club, or organization hash tag name, users can enable the creation of unique WALLS specifically made up of photos from only members of that group. It is a new way to combine and share photos on a real-time, easy, and free basis. So even if family or group members have different phone platforms and carriers, and use different social network sites, they can now consolidate their photos into one WALL for the entire group and their followers to see and comment on.

photoWALL claims to be the only mobile to web service that allows the creation of an instant, sharable collection of photos from a group of friends or family members. By simply hash tagging a photo with “mygroupname,” all photos with this hash tag
appear instantly at photowall.com/mygroupname – regardless of mobile device, location or wireless provider.

photoWALL has also developed an API for use by companies and charitable organizations allowing them to integrate mobile photos, tags and comments from their customers and supporters into their own web sites, creating a new engagement process never before possible. This development will accelerate the expansion of the CPE advertising and fundraising model, where instead of paying for clicks with undetermined results, the advertiser is instead paying only for meaningful consumer interactions with the brand or organization.