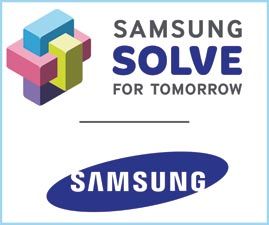 The goal of the nationwide competition is to raise enthusiasm for science, technology, engineering and math (STEM). The competition challenging students and teachers to tackle critical issues across the country.

Through the competition’s community-based learning approach, youths take topics out of traditional classroom settings. They explore hands-on how these subjects address core problems that impact their lives and their regions.

“At Samsung, we know that interest in science, technology, engineering and math is critical for the jobs of today, the future of tomorrow and our long-term business success,” said David Steel, executive vice president of Samsung Electronics North America.

“By launching the Solve for Tomorrow Contest for a fifth year, our goal is to excite students about these subjects and provide schools with the resources to continue fostering the innovators of tomorrow. We saw very strong community impact and engagement last year, and we’re looking forward to building on that momentum.”

The first 5,000 teachers to enter from all 50 states and the District of Columbia will receive a professional development course from PBS TeacherLine; entries close on October 31, 2014. In November, 255 state finalists will be selected. From that pool, 51 state winners (representing all 50 states and Washington, DC) will be announced in December.

Of the state winners, 15 will be selected as national finalists. Those five will present their projects to a live panel of judges in March. Five national grand prize winners will then be selected by a panel of judges, Samsung employees and public online voters.

Additionally three special awards will be given by DIRECTV, the National Environmental Education Foundation and Digital Promise to contestants in the 51 state winner pool. They will be recognized for their pioneering use of math, environmental innovation and civic engagement, respectively. Throughout the competition, approximately $2 million of prizes will be presented by Samsung, Adobe, Fortune, PBS TeacherLine, DIRECTV, the National Environmental Education Foundation and also Digital Promise.

Last year, more than 2,300 schools from every state and the District of Columbia entered the challenge; five teams were named national grand prize winners. Furthermore, one of the winning teams attended the White House Science Fair as honored guests.

The Samsung Solve for Tomorrow Contest was created in 2010 to encourage innovation while addressing the technology gap in classrooms across the country. The competition is a Samsung Solve for Tomorrow initiative, which aims to engage students nationwide in active, hands-on STEM learning. Since 2004, Samsung has provided more than $15 million in technology to 750+ public schools in the U.S.