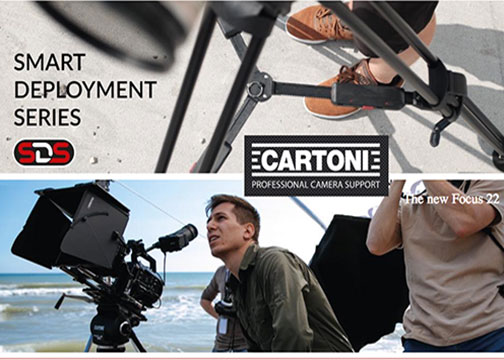 “We continue to expand, enhance and improve our products to keep pace with changes in camera design and production techniques,” said Luciano Belluzzo, Cartoni’s head of International Sales. “We believe our customers will be very excited about these new products, which will help them work more efficiently and capture better shots.”

Available in aluminum and carbon fiber, the SDS system is designed to quickly spread and collapse, making it suitable for ENG, documentaries and other on-the-go shooting. The 75mm SDS system is also available for separate purchase.

The Focus 8 fluid head is rated for payloads up to 17.7 pounds. It uses a continuously variable fluid damping system on pan-and-tilt movements as well as Cartoni’s patented variable counterbalance.

In addition, in response to operator requests, the company is offering an upgraded version of the Focus 22 that has both a flat and 150mm bowl. The new head’s dual design is compatible with many popular pedestals and sliders. As a result, it is geared for rental houses and broadcast production environments that employ a variety of camera and support systems.

Moreover, the new base interfaces directly with 150mm tripods and to pedestals via four bolts. The tie-down shaft can be removed with a 10mm wrench from the 3/8-inch thread to interface with sliders. The Focus 22 now has a wider range of applications, as it supports cameras up to 49 pounds with the patented Cartoni perfect wing counterbalance.

Furthermore, a new version of the company’s best-selling P70 pedestal now includes steering wheels. The P70 is a compact, lightweight, portable support for studio and OB applications. It has a drive that is smooth to allow for easy traveling. The new version includes three sets of double, heavy-duty, individually lockable wheels.

Cartoni’s new E-Cube 7 will also be on display. It is a performing encoded pan-and-tilt head with seven steps of drag in both pan and tilt. This fluid head acts as a pan bar when connected to a remote head. It is also a suitable remote control for cameras on cranes, jibs and drones. It features high-resolution encoders with accuracy said to be at 40.000 c/t. The E-Cube 7 also comes with a flat Mitchell base and optional 150mm adapter.

As the standard E-Cube (100mm base and continuous pan-and-tilt drag), the E-Cube 7 can be supplied in three different options: with Cartoni electronics to operate the Cartoni E-REM 25; with encoders only; transmitting position data to any OEM electronics or fluid head accepting different encoders and electronics in total OEM configuration. cartoni.com