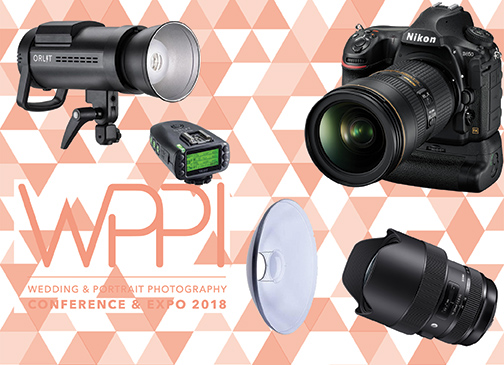 An integral part of our coverage of WPPI 2018, Digital Imaging Reporter’s Wedding Photography Product Showcase includes the latest as well as noteworthy photo-imaging equipment on view at WPPI.

Optimizing the power distribution of the 80mm and other elements minimizes distortion to 1% or lower. As a result, points of light appear as points without streaking. The optical formula is said to produce minimal transverse chromatic aberration, flare and ghosting.

It also features the Sports line’s level of dust- and splashproof construction, with sealing at the mount connection, manual focus ring, zoom ring and cover connection. A water- as well as oil-repellent coating protects the front of the lens to make for easy cleaning.

This anticipated upgrade of the D810 was worth the wait. It combines a 45.7MP BSI, FX-format sensor with no optical low-pass filter and an Expeed 5 processor. They deliver 7-fps, full-res bursts that capture 51 lossless, 14-bit RAW files with full AE/AF. The DSLR alsohas sensitivity settings of ISO 32–102,400. And 4K UHD video is achievable at 30/25/24 fps in full-frame or DX crop-sensor framing. In addition, for multimedia creators, it offers 120-fps Full HD recording; 8K time-lapse mode; zebra patterns; uncompressed 4K UHD recording simultaneously to a digital recorder via HDMI; a stereo mic; and an audio attenuator to adjust sound level.

Anthem One’s “groundbreaking LED technology” uses Anthem Light Cards—swappable, solid-state wafers coated with an array of micro LEDs. Built to be affordable, the lighting system is a modular platform with accessories for more than 24 different applications.

Its variable CRI fits the needs of photographers, cinematographers and theater directors. Its compact size and 30,000 Lumen beam are targeted at architectural lighting. The system can produce a 1.4-mile beam of 940nm military grade IR. Anthem Light Cards are as thin as credit cards, interchangeable and engineered to last 50,000 hours. They’re available in various frequencies, including UV and several types of visible light.

The 5.5″ cube weighs 7.6 lbs. It hides neodymium magnets that snap to steel, other Anthem Ones to create an array or accessories. There are also Kensington lock ports and a ¼”-20 threaded socket which enable users to alter the light field. Accessories include lenses, speed ring adapters, doors and arms for multimedia professionals. Black or silver, $1,499. anthemone.com, Booth 1425

Other features also include: a direct drive SSM system for rapid positioning of the focus groups with minimal noise for fast tracking; a customizable focus hold button; moisture resistance; a fluorine coating on the front element to minimize dust, water and oil; a 1.25-ft. minimum focus distance; and built-in optical IS. $1,300. sony.com, Booth 520

By focusing not only on the bokeh’s size but also its quality, it produces a feathered bokeh effect that better emphasizes the subject against an overall softer background. And its newly developed ED-DSA lens element possesses the characteristics of both ED (extra-low dispersion) lens elements and DSA (dual super aspherical) elements. It compensates for common wide-angle lens issues, including chromatic aberrations, distortion and color bleeding—and also contributes to a lighter weight.

The Cactus V6 II and V6 IIs for Sony cameras are marketed as the “first wireless flash triggers that support cross-brand wireless HSS (high-speed sync) and cross-brand TTL (through-the-lens) automatic flash exposure.” They can control the power output and zoom angle of Canon, Fujifilm, Nikon, Olympus, Panasonic, Pentax and Sigma flashes at the same time (exceptions for Pentax/Sony). SRP: $95 each.

Also on display is the RF60X wireless flash. This portable flash has a built-in wireless transceiver that supports high-speed sync/FP mode as well as AF-assist. Moreover, the built-in transceiver transforms the flash into a tool for off-camera flash photography, offering the capability to wirelessly control its power output and zoom level.

The RF60X can sync with a camera above x-sync when triggered by the V6 II/V6 IIs. As a result, it can be an HSS flash for Canon, Fujifilm, Nikon, Olympus, Panasonic, Pentax and Sony cameras. $185. omegabrandess.com, Booth 1143

Hasselblad expanded its X-system accessories with the XPan lens adapter. The adapter allows photographers to use legacy XPan lenses on the Hasselblad X system.

The Hasselblad XPan lens series was released in 1998, and the new adapter bridges those optics with the latest imaging capabilities from the mirrorless X1D system. Moreover, the adapter is lightweight, compact and designed to work seamlessly into the setup.

“The original XPan lenses inspired us when we introduced the current X1D lenses,” said Ove Bengtsson, product manager. “The new XPan lens adapter speaks to two major aspects of Hasselblad: our drive to innovate and push medium-format technology such as the X1D and also our respect for the legacy equipment that many photographers still rely on to this day. This adapter is the merger of those ideas.”

Furthermore, customers using the XPan lens adapter are advised to first update their X1D to firmware 1.20, launched on December 19, 2017. This update includes a selectable crop mode that features the classic proportions of the XPan system. $179. hasselblad.com, Booth 1168

Adorama, one of the largest photography, video, audio, imaging and electronics retailers, is showcasing its exclusive photography gear as well as accessory brands—Flashpoint, Orlit, 3Pod and Glow—at booth #333. Get hands-on with speedlights, flashes and monolights, including the just-announced Flashpoint XPLOR 600 Pro from Flashpoint and Orlit.

Only available at Adorama, Flashpoint is known for its quality yet budget-friendly studio and on-the-go monolights, speedlights and flashes. Get a demo of the Flashpoint XPLOR 600 Pro monolight, which boasts a recycle time of less than one second.

They are marketed to wedding photographers seeking out a lighting system that can be controlled from just about anywhere in the room. They are also suitable for portrait photographers looking to eliminate excessive wires from the studio.

On view is the Orlit RoveLight RT 610 TTL monolight. The 600ws wireless TTL monolight is engineered to break the Canon RT barrier. It also works with Nikon and Sony Orlit triggers. Moreover, it features a dedicated Orlit smartphone app to give photographers control of the monolight’s settings right from a smartphone.