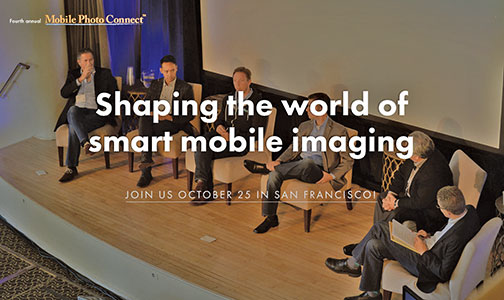 This year’s conference will feature a panel specifically about the rapidly expanding opportunities for photo apps to monetize their engaged user base. A range of mobile print product solutions will also be discussed. The following speakers will participate:

Other announced conference panel topics are “How to Succeed in the Photo App Business” and also “The Next Big Thing: User-Generated VR Content.”

Furthermore, as has been the case since the conference launched four years ago, PowerPoints are banned from the panel sessions. And the no-holds barred sessions have two moderators, Hans Hartman and Alexis Gerard.

Additionally, this year’s conference will feature three Show & Tell sessions. Here, photo and video app developers will each demo their apps in four minutes. In addition, 30 app developers will show their apps to the international audience and compete for the Mobile Photo Connect Awards. For a listing of the first 13 Show & Tell presenters, log on to mobilephotoconnect.com/speakers#anchor.