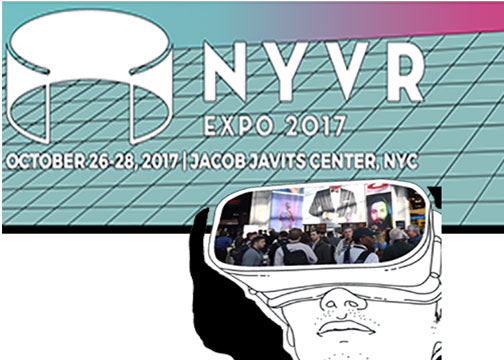 The event is presented by Emerald Expositions, in collaboration with the New York City Economic Development Corporation (NYCEDC).

NYVR Expo was designed to create a unique, interactive experience. Attendees were able to test-drive the latest VR/AR technology. They also got a private glimpse at future technologies currently being developed. In addition to the expo portion of the event, a series of seminars conducted by industry experts illustrated how this technology can be applied to new and existing business applications.

“VR and AR technologies are quickly filtering into new business applications and consumer activities. These include video games and real estate,” said Mike Gangel, show director for NYVR Expo. “Attendees had an opportunity to interact with these new technologies and take a closer look at emerging technologies. They could also learn how they can apply these innovations into their businesses and lifestyles.”

To encourage the continued growth of the industry, the NYC Media Lab hosted the NYC Media Lab Incubator Zone. This area featured the newest start-ups and technologies from the brightest minds in the VR/AR industry.

Moreover, this past June, New York City announced plans to develop and operate a hub for virtual reality and augmented reality. Fueled by a $6 million investment by NYCEDC and the Mayor’s Office of Media and Entertainment (MOME), the hub will leverage the leadership of the NYC Media Lab.

The lab was founded with university partners NYU and Columbia University. It also has partnerships with CUNY and other New York City universities, civic organizations and corporate partners. Administered by the NYU Tandon School of Engineering, the lab will support start-ups, talent development as well as research and innovation.

The NYC Media Lab serves as an anchor for New York City’s emerging VR/AR sector. As such, it is also expected to create 500+ good jobs over the next 10 years. The lab is part of Mayor de Blasio’s New York Works plan to create 100,000 good jobs.

In addition, on October 27, emerging companies in VR/AR technology presented their products and software to industry leaders in this new business-pitch competition. The event took place right on the expo floor.

General attendees had a chance to see and experience the latest innovations. They also got a glimpse into the future during this special event. The Glimpse Group presented the competition. The company was created to cultivate entrepreneurs in the AR/VR industry. In addition, the McCarter & English law firm moderated it.

As part of the overall NYVR Conference + Expo, educational seminars were conducted by innovators and manufacturers throughout the two-day event. Seminars for business professionals as well as consumers covered a range of topics. They included the best practices for producing 360º content, an introduction to 3D audio, an overview of ARKit & ARCore, as well as the future of VR filmmaking.

Moreover, registration for the NYVR Expo gave attendees free access to the annual PhotoPlus Expo. PhotoPlus was collocated with the NYVR Expo at the Javits Center. nyvrexpo.com