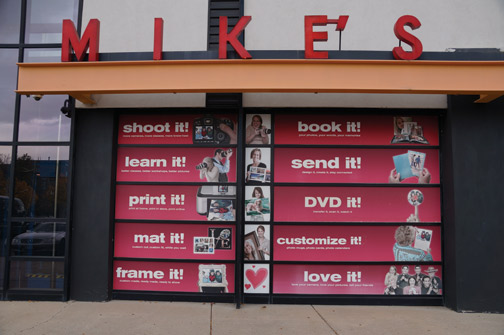 When we think about our Dealer of the Year choice every fall, there are no real hard-and-fast rules for making the determination. It’s not based on sales or size or who had the best year.

We’ve had our eye on Mike’s Camera for a number of years. They’ve been in business since the 1980s, when Kaloust and Aroussiag Christianian bought a retail photo store in Boulder, Colorado, that dated back to the ’60s. Their sons, Jirair, Vahe and Alex, came into the business full-time in the late 1980s and expanded the company to three stores by 1993. But it was their recent, aggressive moves within a market not currently known for aggression—going from three to 13 stores literally overnight—that convinced us this is the Christianians’ year.

Sitting down with Jirair and Alex Christianian in their Boulder HQ store, we talked about their growth years, running a family business and the recent expansion that quadrupled their franchise.

The three brothers, all with different talents, always had expansion on their minds. “Mike’s Camera started in 1967 and was a single-store location for many years,” explained Jirair. “My dad bought the business in 1980, and the kids were involved early on, working there during the summers. In 1989, my two brothers and I decided we could work together and take it to a different level.”

Within a couple of years, they moved to their new Boulder location and went from 20 employees to 50 overnight. Within three years, they opened two other stores in Denver.

“Everyone was saying, three brothers, three stores,” said Alex. “But it was never run that way. Our skills really complemented each other: I was into marketing and store merchandising; Vahe was great at sales; and Jirair controlled accounting and finance.”

The company remained that way for almost 20 years, until things got interesting. As Vahe had pursued other interests (including running the very successful LifePics online imaging solution), Jirair and Alex made the next step. They bought five Ritz stores in Colorado and another five in Northern California. In 2012, they went from three to 13 stores overnight—all on Black Friday.

“Our plan was to open on Black Friday,” explained Alex. “We also were going from 75 to 150 employees,” he added. “It was a huge step, because we had to convert our culture. We had a meeting about the expansion with the staff and basically challenged ourselves to do it. The most common question we asked ourselves was if we totally lost our minds. But we did it anyway.

“On Wednesday, I called Jirair from the West Coast and said, ‘There’s just one of me and there are five stores out here, and we’re opening them tomorrow!’ So Jirair and three other people came out, and we opened! It was a crazy day, but we couldn’t miss the date, so we went for it.”

“Probably one of the biggest lessons learned was that we knew we weren’t going to be perfect overnight,” said Jirair. “We’ve always stressed a certain level of execution and quality in everything we do, so it was a counterintuitive moment. We had to put some things on the back burner for a while; we had to do the best that we could for a little while, but we had to open.”

So how did their father feel about all of this?

“A lot of PRO members come from family businesses,” said Jirair. “It’s funny to hear how many of them have had difficult transitions from one generation to the next. Because for us it’s a foreign thing to hear: our dad was always encouraging us to try new things in the business. He let go much more easily. It was never an issue of control, rather he expected us to learn from our own mistakes.

“He has a saying hanging on his wall: ‘The only difference between the difficult and the impossible is that the impossible takes a little more time.’ His original vision was to move to a bigger store, and when we told him about our idea to grow from three to 13 stores, he wanted to know specifics about what we were thinking—how we were putting it together. But there was never any kind of discouragement. I’d call it concern, with lots of support.”

Now that it’s been three years since the expansion, I asked them if all of the stores are truly Mike’s Camera stores.

“Some are and some are still getting there,” said Alex, “but they’re not all like our Boulder store. Our biggest store in California is smaller than our smallest store in Colorado. They’re all single locations with many located in shopping strip malls, so in some cases our product mix is affected. A big part of Mike’s advantage is our product selection, so that’s a bit of a constraint. We’ve also centralized some services to free up space in the stores.”

The obvious next question was, will there be even more Mike’s stores?

“Yes, there’s room for more,” said Jirair. “It’s more about making sure we feel good about where we can go, and making sure the next step becomes a good fit.”

Jirair and Alex Christianian are two of the nicest men I’ve ever met—and probably two of the smartest as well. They have built their company by responding to the market, taking huge risks, showing patience and sometimes changing the rules. For these reasons, we’re proud to name Mike’s Camera as our 2015 Dealer of the Year. mikescamera.com