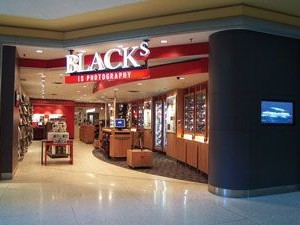 “Technology is changing the way Canadians take and share pictures,” Luiza Staniec, a spokesperson for Blacks and Vancouver-based Telus, said in a statement. Staniec explained that consumers are now sharing their pictures via social media sites and using cloud storage rather than printing out photos.

When Telus acquired Blacks, whose primary business is photofinishing and photo-related equipment, there were 113 locations. The buyout was in response to competitor Bell Canada Enterprises’ purchase of the 493-location The Source. The move was part of an effort to obtain lucrative mobile photo subscribers via an established national retail chain in a complementary business sector.

“The photography chain was not ever a strategic fit; even then the writing was on the wall that digital photos were the death knell for consumer photography services,” Staniec said. While an effort to revamp Blacks did improve profitability, in the end, the project was deemed too expensive to succeed in a changing market. Staniec added that efforts were being made to find positions for the photo chain’s 485 employees within Telus and Koodo.

Analysts have speculated that Telus simply failed to convince Canadian consumers that photo retail specialist Blacks was also a place to buy their mobile phones.

Headquartered in Toronto, Black’s was founded in 1930 by Eddie Black as an appliance store. In 1948, his sons, William Edward Black and Robert Black, opened Toronto’s first specialty camera store, known as Eddie Black’s Cameras. The expanding family-owned firm became a public company in 1969 and was later sold to Scott’s Hospitality Inc. in 1985. In 1993, Fuji Photo Film Canada bought the company’s 210 stores for $65 million from Scott’s. The company again changed hands, evolving into the privately held Blacks Photo Corp. Then in 2009, Telus bought its 113 stores for $28 million from ReichmannHauer Capital Partners, which had purchased the chain two years earlier for an undisclosed price.