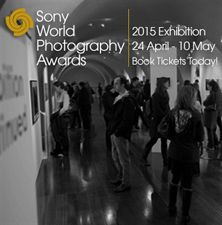 The 2015 awards attracted recording-breaking entries, with 173,444 images submitted from 171 countries, confirming its position as the world’s biggest photography competition.

Chosen from the winners of the awards’ 13 professional categories, John Moore’s winning work, “Ebola Crisis Overwhelms Liberian Capital,” is a hard-hitting series of images that cut to the heart of this human tragedy. Moore, a senior staff photographer and special correspondent for Getty Images, and the winning photographs have been credited for the early exposure of the scale of the Ebola epidemic in Monrovia, Liberia—the epicenter of the disease. Moore was presented his award along with a $25,000 cash prize and the latest Sony digital imaging equipment at a gala ceremony held in London.

Based in New York, Moore has photographed in more than 70 countries. He is a past recipient of the Robert Capa Gold Medal, been named Photographer of the Year by both Pictures of the Year International and the National Press Photographers Association and has been recognized four times by World Press Photo.

In a collective statement, judges Xingxin Guo, Xinhua News Agency Image Centre, China; Jocelyn Bain Hogg, photographer, UK; and Oliver Schmitt, Spiegel Online, Germany, said of the work: “John Moore’s photographs of this crisis show in full the brutality of people’s daily lives torn apart by this invisible enemy. However, it is his spirit in the face of such horror that garners praise. His images are intimate and respectful, moving us with their bravery and journalistic integrity. It is a fine and difficult line between images that exploit such a situation, and those that convey the same with heart, compassion and understanding, which this photographer has achieved with unerring skill. Combine this with an eye for powerful composition and cogent visual narrative, and good documentary photography becomes great.”

Aristide Economopoulos, a staff photographer with NJ Advance Media from New Jersey, was selected as the Arts & Culture winner of the Professional competition.  His series titled “Prom Night” documents the art and culture of a rite of passage for American teenagers. Economopoulos has won numerous awards, including the New York Press Association’s Photographer of the Year title on five occasions. He was a member of the team awarded a Pulitzer Prize in 2005 for Breaking News Reporting and honored for his work covering the 9/11 World Trade Center terrorist attacks.

Now in its eighth year, the Sony World Photography Awards is free to enter and open to photographers of all abilities. The awards’ international judging juries are comprised of esteemed industry experts, and the competition offers incredible exposure, credibility and recognition not only to its winners but also those on its short list.

The full list of winning photographers and those in 2nd and 3rd place in the Professional Competition can be seen at worldphoto.org.