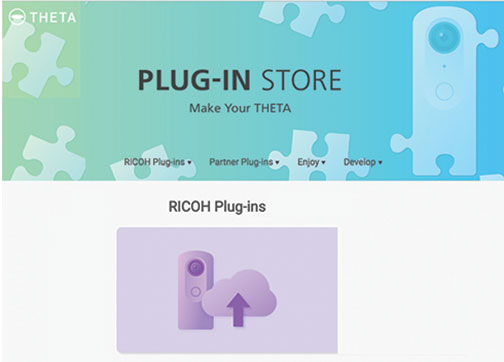 Among the new capabilities provided by the plug-ins are wireless live streaming, remote camera control and automatic image uploads. Plug-ins created by Ricoh as well as Sony, NTT DOCOMO and HoloBuilder are downloadable from the site.

In addition, the plug-ins are created by members of the Ricoh Theta Plug-in Partner Program. This program allows third-party developers to create their own Android-based software plug-ins for the Ricoh Theta V. Based on the open-architecture Android operating system, the camera is unique among 360º imaging cameras in that its functionality can be expanded by installing plug-ins.

Ricoh kicked off the partner program with a website that provides access to tools and online support. Since its inception, a variety of developers have joined the program, and five third-party plug-ins are currently available from the store. Three new plug-ins developed by Ricoh are also available.

NTT DOCOMO (development framework provider) created new functionality for the existing WebAPI plug-in (from application developer GGlue). It can now collect information from as well as control the function of the Ricoh Theta V’s built-in sensor. The Device WebAPI Plug-in conforms to OMA GotAPI specifications, which builds a WebAPI on the camera and enables function access via a common WebAPI on other devices such as smartphones.

Developed by Sony Corporation, MESH is a platform of app-enabled smart triggers that can transform everyday objects into smart devices controlled from a phone or tablet. The MESH plug-in for Ricoh Theta enables direct control of the camera via a MESH block.

EVRYPLACE Sync allows for uploads of images created using the Ricoh Theta V camera and the EVRYPLACE app. Via the plug-in, individuals using the EVRYPLACE editor can get instant updates on their projects. They can choose 360 images on the Ricoh Theta V, open the app and upload the images directly from the camera to a project. EVRYPLACE is for real estate sales, delivery documentation, insurance documentation and also training material updates.

HoloBuilder’s 360 SiteStream plug-in gives construction companies 24/7 access to view construction sites in 360° through live streaming. Users can set up a Ricoh Theta V in critical locations on a construction site and then remotely zoom into the project from anywhere to see what is going on in real time. The plug-in allows adding an infinite number of 360º live streams.

Developed by Everywoah, Fita is a plug-in suite that enables Ricoh Theta V owners to connect to Google Cloud Storage. Fita is an onboard camera plug-in as well as a companion Android/iOS app for a smart device. It allows the Ricoh Theta V to upload media to a connected Google Cloud Storage account for team collaboration for a 360º photo as well as video workflow over Wireless LAN.

Also available at the plug-in store are the following Ricoh-developed plug-ins.