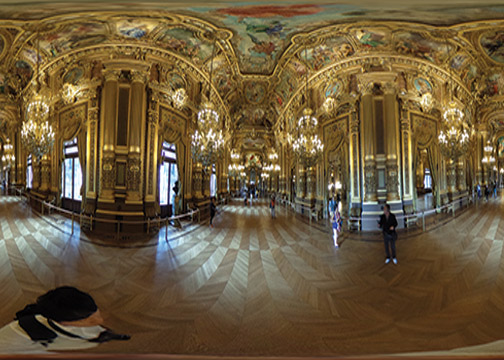 After an initial flurry of interest, 360º cameras haven’t quite taken off yet as an imaging category experiencing strong growth. Predictions and estimates vary, too. Strategy Analytics forecasted a 1,500% increase in global sales up to 2022; ReportsnReports suggests a modest 12% compound annual growth rate to 2022. Either way, social networks are embracing the content people produce with these cameras.

Vendors like Samsung, Kodak, Ricoh, Insta360, Nikon and Humaneyes have released 360º cameras that are capable of capturing footage and still images in that orientation. Even on the smartphone side, there are camera attachments specifically for the iPhone, Motorola and Essential—along with others designed to be more universal.

Posting content has been limited, but the gates are slowly opening. Here are some of the key options users have to share their 3D and 360º images.

Facebook 360 is a group page the company has maintained for more than two years, allowing users to share and discuss 3D imagery. When first rolled out in 2016, images on the News Feed were limited to panning at a reduced 180º angle. By opening things up with wider support, it’s possible to see any part of the 3D image.

When users share 360º images on Facebook, viewers can scroll, pan and tilt to see them in all their spherical resolution. They can click and drag to angle it any which way on a desktop browser or tilt and pan a smartphone handheld.

With 3D photos, the image doesn’t have to be shot with a 360º camera. Facebook software creates a sort of parallax effect with portrait mode shots taken on the iPhone (7 Plus, 8 Plus, X, XS and XS Max). Facebook recommends subjects be about four feet away with a distinct foreground and background. As users scroll or angle a mobile device, it’s like peeking through a window to see what’s behind it.

This feature will roll out to other phones, especially since portrait effects are increasingly common in flagship and mid-range handsets.

YouTube has an official dedicated VR channel that is a repository to showcase popular 360º and 180º videos as a way to promote it. Uploading VR content isn’t exactly the same process as any other standard video clip, though the parameters are reasonably broad.

The popular video platform recommends high-resolution video encoding (up to 8,192×4,096) and a 2:1 aspect ratio, with support for 24, 25, 30, 48, 50 or 60 frames per second. Where things get tricky is with the metadata. YouTube outlines the steps, which include downloading a 360 Video Metadata app to inject the spherical video with the right metadata.

Some 360º cameras offer direct uploading to YouTube, bypassing the metadata step usually required on a Mac or Windows PC. Once uploaded, there’s a pan button on the top left of the video when viewing it on a computer that can be rotated using the WASD keys. Viewing the video in YouTube’s VR app on a headset or phone only requires physically looking around.

Flickr’s support for 360º and 180º photos goes back a few years, except its expansion has been limited. The primary viewing option is the Samsung Gear VR, which is heavily promoted on the site. It’s technically possible to view them on something else, like Google Cardboard, albeit by using a third-party app.

Flickr says it will enable autotag and upload support for VR images to automatically detect them and set up the photo viewer. The VR viewer currently requires signing up for a Yahoo account, but once done, viewing images is pretty simple.

Despite the early support, and the platform’s focus on sharing photos, Flickr’s VR portal is not as deep as others. It hasn’t really grown its level of support, and with ownership having moved from Yahoo to SmugMug, the future is unclear.

This platform’s entire purpose is to share and explore 360º and 3D images. It’s not exactly like Instagram for 360 photos, but it has a similar premise. The idea is that users can upload their images and also browse what others have posted.

Kuula recently launched an update called “360 tours,” where panoramas feel like virtual tours of a place or space. The caveat is that uploading a photo is free but sharing it isn’t. The Pro subscription (starting at $12/month) puts an onus on business use cases, like real estate and travel, and adds a number of features to personalize them. Those features include the ability to embed the virtual tours onto other sites or platforms, like Facebook.

With the option to add text, links and video “hotspots” into the image as a tour progresses, Kuula tries to make them a little more dynamic. In that regard, the service feels like it brings in elements of presentation software, like Prezi. Sharing is also selective, allowing users to choose who can view a tour, rather than making it public.

Whomever gets to view the post can do so on a web browser (Mac/Windows) or mobile device (iOS/Android). Kuula says it offers live support for embedding virtual tours onto websites, including direct tie-ins to compatible social media postings.

Acting as a VR content portal, VeeR originally started in China before spreading its wings throughout the world. It currently has 50,000+ creators and 30 million users hailing from around 180 countries.

VeeR’s footprint is, in part, because of its broad-based support for different platforms. It has an app for high-end headsets, like the HTC Vive and Oculus Rift, as well as more affordable ones, such as the Samsung Gear VR, Google Daydream View and Windows Mixed Reality.

Uploaded content is always available through VeeR’s site or app. But it also offers a relatively easy shortcut to share it via social media. Clicking the share button makes it possible in mere seconds. It also provides an embed link to attach it to a website or content source. Either way, a navigation circle appears on the right to help orient the image.

More recently, VeeR launched a free web-based tool enabling users looking to create VR photos and videos. Expanded editing features include adding visual and audible hotspots to make it more interactive and compelling. Those tools also apply for the mobile app, letting users edit on the fly before uploading anything to social media.

In that regard, VeeR could act as a VR editor to prepare spherical content, rather than just a place to showcase it. It doesn’t offer the same feature set as Kuula, but it is a dedicated space for VR images.

It’s clear social networks are dedicated to supporting the 3D and 360º content produced by a growing number of devices. While still a fledgling imaging category, end use cases for this content are growing every day.