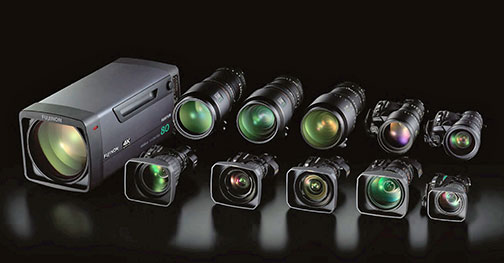 Wayne, NJ—The Optical Devices Division of Fujifilm, Fujinon embarked on a series of hands-on, educational seminars involving their cine-style zoom lenses. The seminars are part of the company’s overall initiative to increase awareness of its cine-style zooms among cinematographers, camera operators and camera assistants throughout the world.

Based on initial reviews from feature film and episodic cinematographers as well as rental-house lens technicians at each of the regional events, the seminar series has the potential for a long run, the company announced.

The first “Fujinon Day” was held at the prestigious ASC (American Society of Cinematographers) Clubhouse on May 24, 2016. To date, three other events have followed in the U.S.: Austin, Texas, at MPS on September 15; Atlanta, Georgia, at ARRI Rental on September 24; and New York City at AbelCine on November 1.

The next event, Fujinon Day at Sony DMPC in Los Angeles, is scheduled for December 1, 2016. Upcoming events will also be held in Sao Paulo, Brazil; Vancouver, Toronto and Montreal, Canada; Miami, Florida; and Boston, Massachusetts.

“Our goal with these events is to allow filmmakers to see for themselves the capabilities and characteristics of our extensive range of Premier and Cabrio lenses. And combine that with the opportunity to learn from masters like Bill Bennett, ASC; William Wages, ASC; and Dejan Georgevich, ASC,” said Chuck Lee, Western Regional and Technology manager, Fujifilm Optical Devices Division.

“We strongly encourage comments and questions during the presentations. We see these days as educational in nature, a chance to talk about how the technical aspects of lens design relate to the look and feel, rather than merely boast about our lenses,” Lee added.

After leading a discussion about the subtleties of lens characteristics at the Austin, Texas, ASC event, noted cinematographer Bill Bennett, ASC concluded: “Many of the attendees were very experienced cinematographers. They don’t need to be told what a good lens is or what good performance is. They would just as soon come and see for themselves and make up their own minds.Everybody makes judgments about lenses in their own way, so we just gave people the tools to take a good look.”

Cinematographer Ian Ellis, known for his dramatically lit DP work on the TV series The Lying Game and second unit DP work on Friday Night Lights and Revolution, had never seen a Fujinon Premier lens in action before Fujinon Day in Austin.

“I would love to get the 25–300mm Cabrio on a TV show,” Ellis said. “It’s got such a huge range and doesn’t fall apart at the long end wide open. We tend to live on big zooms on TV dramas, and we could go so many directions with that lens. I also really want other people to see what it can do. And the Premier 75–400mm lens is insanely cool. It would be my ideal long-end lens for a feature film.”

Speaking about the LA ASC event, Matthew Duclos, COO/project manager, Duclos Lenses, said: “This was an excellent event. At Duclos, we’re very proud of our independence. We’re not devoted to any single manufacturer. And an event like this isn’t something you’d normally see outside of a dedicated service shop or rental house. It’s great to have a neutral organization like the ASC conduct an educational seminar.”