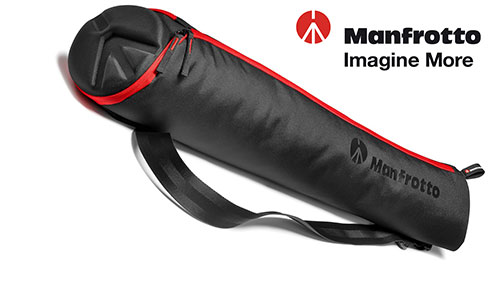 With the addition of these three models, Manfrotto’s tripod bag range matches several of its photo tripods, including the 190Go! and 290 collections.

The bags’ asymmetric tapered shape is designed to allow photographers to store a tripod with the head attached. Tripod legs fit in the narrower end with extra space for the larger volume of the head at the wider end. For easy access, the bags incorporate a zipper that extends down the full length of the bag, even where the head is stored. Each bag also includes a shoulder carry strap.

The 30-inch bag is available with a full-padded option. Padding on the entire length of the bag offers tripod protection, and thermoform padding on the top also protects the tripod with the head mounted.

The three new bags are made with ballistic nylon to prevent them from tearing and to eliminate abrasion. In addition, an external coating makes them water repellent.

Manfrotto is a designer, producer and distributer of professional products for photography, video and entertainment. The company was founded in 1972 by Lino Manfrotto, with a mission to support and simplify the work of reporters, photographers and producers. Part of the UK-based Vitec Group since 1989, Manfrotto operates in nine key markets—Italy, France, Germany, the United Kingdom, China, Japan, Hong Kong, the United States and the Netherlands—where it is represented by its own direct distribution system, Manfrotto Distribution. In 80 other countries, sales are handled by independent distributors. manfrotto.us