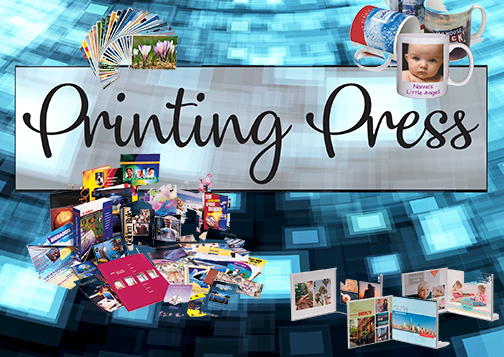 There is a common perception that the U.S. photo printing market is declining. Ongoing market analysis of both the consumer retail and professional market segments by the authors strongly indicates that it is, in fact, growing.

Consequently, in late 2017, we developed a 150+ slide PowerPoint presentation to debunk this misconception and demonstrate growth.

The combined U.S. photo printing market in 2016 was estimated at $10.1 billion, excluding home printing and instant. The consumer retail segment was estimated to have reached $3.8 billion in 2016. This represents 176 million print orders—8.2 billion printed units (prints, photo books, greeting cards, wall décor and calendars). And 47% of them were printed at off-site print service providers. Growing, it is forecast to reach $4.5 billion in 2018.

Traditional prints are declining as a share of all orders, although the revenue/unit has increased. Retail store production is likely to continue to represent a smaller percentage of overall photo print output (a reflection of diminished retail chain investment appetite, fewer retailers offering in-store production and consumer preference for a broader portfolio of personalized products).

Continued improvements in printing technology will reduce the cost of some key products (e.g., wall décor and photo books). This will lower the average sale price (ASP), even as product innovation and emerging business models push awareness, access and value deeper into the mass market.

Whether they choose to create and order on smartphones, on websites or in retail stores, in 2016 U.S. consumers enjoyed vastly improved ease of use as well as unprecedented access to both their photos and expanding selections of exciting and relevant personalized products.

It’s increasingly all about mobile! There are more than 1.2 billion people accessing the web from their mobile devices. Mobile web adoption is growing eight times faster than web adoption did in the 1990s and early 2000s.

Smartphones are having a huge impact on the photo industry, representing the single most important catalyst for expanding worldwide consumer photography in history. Indeed, 58% of all U.S. consumers already own a smartphone. According to Deloitte Predictions 2016: Photo Sharing: Trillions and Rising | Technology, Media and Telecommunications, 2.5 trillion photos are shared or stored online.

Notably, during 2016, only six retailers controlled 80% of the total U.S. retail print volume. While Shutterfly enjoys the dominant share of mind and revenue in the U.S., it is third in total orders. Walgreens enjoys a significant (and growing) lead in photo output order share. Together those two represent 50% of the U.S. revenue from photo output. Only Walmart, among all other retailers, currently enjoys a double-digit share of total revenue.

There are currently key trend drivers that are helping to transform retail photo output and seed new growth opportunities (see Figure 2). In addition, there are also innovations in printing, which can be disruptive, continuous or process, and ongoing evolution of media, even traditional silver halide paper.

Digital printing facilitates the production of photo output products on many substrates besides paper. In fact, some of the fastest growing products, particularly personalized décor products, are those that are printed on non-paper substrates.

Moreover, often overlooked, the U.S. professional photo print segment has many subsegments, as shown in Figure 3, and was valued at $6.3 billion in 2016. Each of the active segments that drive professional printing has its own dynamics. Changes in technology, in consumer behaviors and expectations, and in business models continue to create a very fluid and challenging environment for professional photography and printing.

The recent acquisition of Lifetouch, the dominant company in the U.S. professional photo market, by Shutterfly attests to the challenge of transitioning from traditional to the e- and m-commerce business model. In recent years, Lifetouch had absorbed many former competitors. 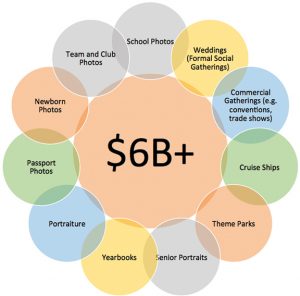 The overall market declined from $8.8 billion in 2009 to $6.3 billion in 2016. However, as is the case in the consumer retail segment, the increasing promotion of photo décor and gift items beyond the basic print package, unimagined only a few years ago, is stimulating growth in many professional subsegments.

There is much nuance to consider in professional printing (unlike consumer printing). The most critical nuances include the fact that: 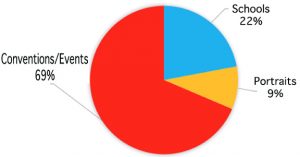 We have assigned the industry into three basic categories (see Figure 4). We estimate that a total 248.5 million customers were photographed by a professional during 2016.

The delineation between “consumer” and “professional” printing has all but disappeared. This is due to an increased quality of printing and a wide range of personalized photo products offered by both segments.

A more detailed overview, along with an order form for the full report, can be found at Expanding U.S. Photo Print Report 2017 – Table of Contents.