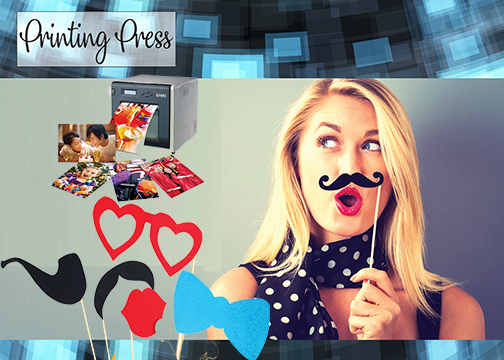 Since the first coin-operated machine delivered ferrotype prints to attendees of the 1889 Exposition Universelle in Paris, consumers have been drawn to the novelty of instant portraits. In the U.S., Russian immigrant Anatol Josepho patented the first automated photo booths in 1925.

Josepho opened the Photomaton Studio on Broadway in New York City, where four curtained-off photo booths delivered a strip of eight photos to customers in about eight minutes.

Today, savvy entrepreneurs have brought about sweeping new growth in the classic photo booth industry by incorporating the latest in social media and imaging trends.

Rob Savickis of Niagara Falls, Ontario, is one of the leading entrepreneurs driving this new business. A longtime professional in the entertainment industry, he was introduced to digital photo booths in 2011. He realized the potential and added photo booth rentals to his DJ service. They were a huge success.

Three years later, Savickis founded Photo Booth Expo, an educational program and trade show for the photo booth industry. Attendance has grown from 1,300 in 2015 to a projected 4,000 expected at the Westgate Las Vegas Resort, March 8–11, 2018.

Savickis attributes the recent booth boom to social media, love of the selfie and what many in the business call the fun factor. “Just a decade ago, having a photo booth at a wedding reception was a novelty,” he says. “Today it is hard to imagine a wedding without one.

“Everyone has fun in a photo booth. However, the part our guests don’t see is the effort, expertise and equipment it takes to make it look easy. The advice I share with anyone getting into this business is to build a relationship with your vendors. This means everyone from the guy who sells you a printer to the event planners and caterers. I wouldn’t know half of what I can offer my clients if it weren’t for my ongoing relationships with my suppliers.”

Michelle Burt of Breckenridge, Colorado, launched her rental business, Snowflake Photo Booth (snowflakephotobooth.com) in 2012. She partnered with a professional DJ who was interested in expanding her entertainment services. “She needed an investor and I needed a new revenue stream. I ran the numbers and they looked good. We literally hit the ground running.”

Burt purchased a closed booth manufactured by Atlanta Photo Booth. The model 5 included a wraparound curtain for privacy, a 22-inch touch-screen display, a miniature Intel CPU and LED modeling lights. It came with either a Canon EOS Rebel T5i or T3i DSLR.

“Six years later, I can honestly say it was a good choice,” says Burt. “We were able to convert to an open booth format by simply removing the curtain rod. And we love the sturdy structure.”

Darkroom Booth software allows her to customize the touch-screen user interface and print within the program. “This allows me to color match when I see the other printed collateral at the event or make a last minute edit to the text in one of the programs. Darkroom also offers a robust set of features, like 360º photos, gifs and boomerangs, text and e-mail output.

The open booth format allows Burt to incorporate a variety of backdrops. They also provide a large assortment of props. “I love to customize the choices based on the client and event. Classics like sombreros, oversized glasses and boas look great on everyone. We also offer a Village People set and Super Heroes.”

Burt prints with the DNP DS-RX1HS and DNP DS620A dye-sub printers. “The RX1 was my first. It’s a true workhorse. It holds 700 prints at a time, and although it’s heavy, it’s manageable. The 620A offers additional print sizes.”

When she started the business, Burt expected most of her jobs would be rite-of-passage events, like weddings, sweet 16s and bar/bat mitzvahs. “In hindsight, 75% of our business has been corporate. It’s a part-time job for me. I work my photo booth business an average of 10 hours a week, either in the office or at events. It fits into my lifestyle as a mom, entrepreneur, techie and extrovert!”

Like thousands of other customers, Michelle Burt relied on Imaging Spectrum of Plano, Texas, to help build her new business. Founded more than 20 years ago by two former Kodak employees, Imaging Spectrum was one of the first all-digital imaging dealers in the United States. Today, it is the largest dealer in event and photo booth equipment, specializing in support and consultation.

“In the 10 years I’ve been here, we’ve helped thousands of people get from the ground floor to a position of profitability in the event photo booth market,” says Steve Behen, Imaging Spectrum’s sales manager and official photo booth guy.

Behen sees technology as the driving factor in photo booth growth. “Dye-sublimation printers got smaller and more portable, prices came down and photo booth software programs were entering the market. All of these factors came together, and someone had the bright idea to make a mobile photo booth. It blew up and became its own industry overnight.

“Thanks to social media and places like Facebook, business owners started to connect, booth builders got into the game and it snowballed into a significant part of the larger event umbrella.”

These factors also contributed to market saturation, says Behen. “There’s such a low barrier of entry into the photo booth business, just about anyone can afford to start their own company. As a result, the market is heavily saturated, to the point that it’s affecting prices, with the booth companies battling it out.”

Eventually there will have to be a flushing out of the competition, he believes. Successful businesses will need to distinguish themselves with higher quality product and more effective sales and marketing.

“That’s where the print comes in,” explains Behen, whose first career at Kodak taught him the value of the printed image. “It’s no less important today than it was a generation ago, especially with millennials who depend so much on digital. It’s our role as image makers to educate our clients about the value of providing real prints at their events.”

As part of its consultation services, Imaging Spectrum publishes a printer comparison chart of the most popular small-format printers. It compares units on the basis of price, printing speed, cost per print, prints per roll, and weight.

“Every client has a different priority,” says Behen. “It’s kind of like walking onto a car lot, you either want the Porsche or the Nissan Sentra. So I like to break it down by performance and budget. Some clients are looking for the lowest price, while others want faster output, better print quality or higher capacity.”

Behen doesn’t see demand going down for photo booths. Success will depend on quality, photographic expertise and the ability to keep up with the latest technology and trends.

•    DNP Imagingcomm America is a popular supplier of dye-sub photo booth printers. The SL620A Snap Lab and DS820A both offer pano printing. DS40 panoramic prints range in size from 6×14 to 8×32 inches. They make stunning displays when printed with a composite of the client’s favorite photos. dnpphoto.com

•    Ciaat-Brava is a South Korean company distributed here in the States by Imaging Spectrum. It makes the Brava 21 photo and sticker printer, which is capable of printing both standard photos and photo-quality stickers. imagingspectrum.com