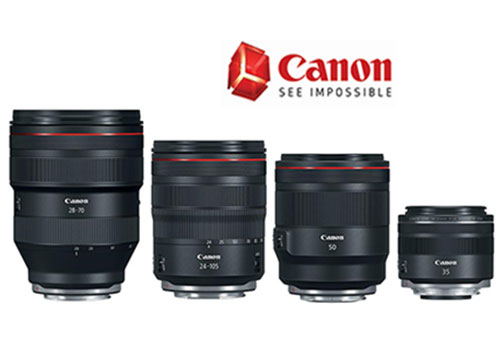 Moreover, with more than 130 million EF lenses in circulation, Canon announced three RF lens mount adapters that expand the capabilities of existing EF lenses when paired with the EOS R.

“Knowing exceptional optics are a vital tool in shaping the image a photographer captures, Canon designed the EOS R camera system from the ground up with optics as the starting point,” said Kazuto Ogawa, president and chief operating officer, Canon USA, Inc. “Canon is very excited about the world-class optics we have developed to marry with the new RF mount. With our rich history and more than 130 million EF lenses being used across the globe, Canon optics will continue to be at the forefront of our digital imaging development now and into the future.”

Three of the RF lenses are L-series optics with dust- and water-resistant construction. All four have a customizable control ring that lets photographers adjust exposure compensation, shutter speed, aperture or ISO.

The RF 35mm f/1.8 Macro IS STM is a fast, wide-angle single-focus lens. The compact lens has a 0.5x maximum shooting magnification to capture flowers, food and even insects. It also provides 5 stops of IS and is compatible with hybrid IS, compensating for angular and shift camera shake. $499.99.

Thanks to the new large lens mount design, existing EF and EF-S lenses that are mounted via an adapter on Canon’s EOS R camera will have enhanced capabilities. EF as well as EF-S lenses can pair with the EOS R using one of three RF mount adapters.

The Canon mount adapter EF-EOS R is a standard adapter that provides full compatibility with EF lenses. Autofocus, metadata as well as optical image stabilization on EF lenses all continue to work with the EOS R camera through this adapter. $99.99.

In addition to EF lens compatibility, the drop-in filter mount adapter EF-EOS R allows for lens filters to be used behind any EF lens. As a result, it helps photographers utilize variable ND and circular polarizing filters with any EF lens. This adapter is scheduled for a February 2019 release. It will retail for $399.99 with a variable ND filter or $299.99 with a circular polarizing filter.