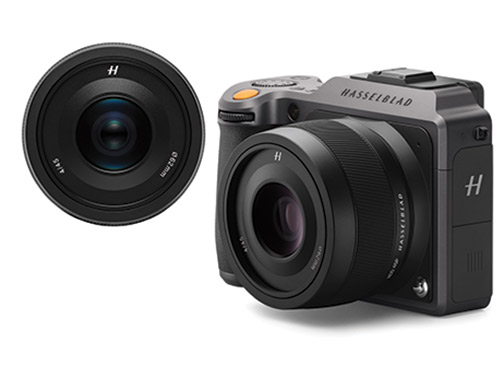 Union, NJ—To further the capabilities of all Hasselblad X system cameras, the company launched the Hasselblad XCD 4/45P lens for its digital medium-format camera system. Designed for the utmost in portability, the XCD 45P stands as the most lightweight and compact member of the XCD lens family.

The new lens weighs in at only 0.7 pounds and measures 1.85 inches in depth. “The XCD 45P is the world’s lightest digital medium-format autofocus lens on the market today,” the company announced.

The XCD 45P lens allows photographers to bring quality optics on any adventure; ranging from travel photography across deserts and up mountains to urban exploration and documentary. The minimal weight of the XCD 45P coupled with the X1D II and Phocus Mobile 2 will permit creatives to go physically farther with their creative visions due to lighter gear in their kit and a portable workflow.

“We’re extremely proud we could produce a lens with as high optical performance as the rest of our XCD lenses in such a compact form,” said Per Nordlund, Hasselblad’s lead optical designer.

Moreover, the new XCD lens features an optical design that incorporates two aspherical elements. As a result, the lens is able to offer “state-of-the art optical performance within compact dimensions,” added Nordlund. In addition, the lens design has discreet portability in mind; and thanks to evolved technologies, both the autofocus motor and leaf shutter were reduced in audible noise. The company also claims that photographers will find the new leaf shutter is less audible than many focal plane mechanical shutters.

Furthermore, the lens features a minimum focus distance of 13.8 inches as well as a maximum image scale of 1:5.2. As a result, it is even suitable for food or still life photography. What’s more, a mechanically connected focus ring gives the lens a responsive and accurate manual focus.

“Just as with the other XCD lenses, the XCD 45P is uncompromising in its build quality; technical excellence; optical performance; and balance in handheld use in addition to its built-in leaf shutter that allows for flash sync up to 1/2,000s,” added Nordlund.

The Hasselblad XCD 4/45P digital medium-format AF lens has a suggested retail price of $1,099, excluding VAT. The lens is now available for order and will ship in late January 2020. Moreover, Hasselblad also announced that an upcoming firmware update will provide support of the XCD 45P for the X1D-50c camera.