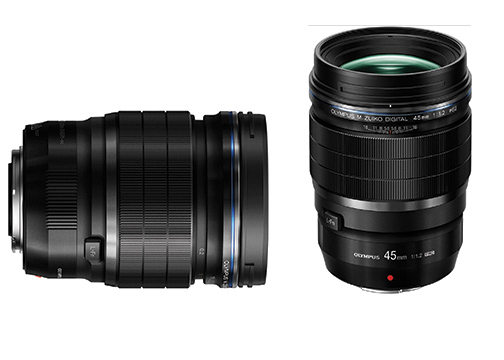 Both prime lenses are designed to offer more flexibility in low-light environments as well as shallow depth of field. They are said to help produce “three-dimensional images that represent subjects as they appear in the real world through a combination of feathered bokeh and sharp resolution.”

By focusing not only on the bokeh’s size but also its quality, they produce a feathered bokeh effect that better emphasizes the main subject. This results in an overall softer background, allowing the subject to stand out within the image. The shallower depth of field produced at f/1.2 is especially suited for portrait photographers.

In addition, a newly developed ED-DSA lens is incorporated in the M.Zuiko Digital ED 17mm f/1.2 Pro. ED-DSA elements possess the characteristics of both an ED (extra-low dispersion) lens element and a DSA (dual super aspherical) lens element. The ED-DSA lens compensates for common wide-angle lens issues, including chromatic aberrations, distortion and color bleeding on the periphery. It also reduces the overall weight of the lens and the number of lens elements. The 17mm lens has 15 elements in 11 groups.

Both lenses also use Z Coating Nano technology to reduce ghosts and flares that tend to occur in backlit images. Moreover, like other lenses in the M.Zuiko Pro series, these two new primes boast compact, lightweight construction. They also have a dustproof, splashproof and freezeproof (to 14°F/-10°C) design.

Another accessory, sold separately, is a protection filter—the PRF-ZD62 Pro. The filter features ZERO coating to cut reflection by approximately one-half compared to conventional multicoating; black-edged glass; and a satin-finished black alumite aluminum frame for a matte surface that suppresses reflections. It will retail for $64.99.