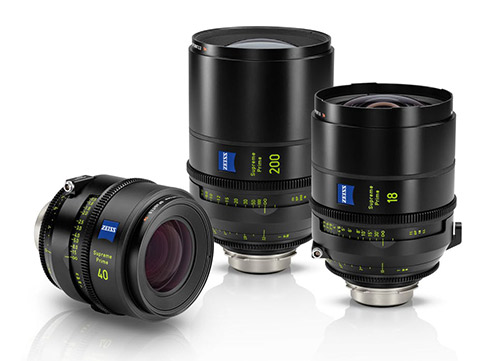 Moreover, the addition of the 40 millimeter prime lens with a maximum aperture of T1.5 means there is now a total of 14 prime lenses in the series.

“By adding a 40 millimeter lens, we have introduced a surprise member to the Zeiss Supreme Prime family,” said Christophe Casenave, Cinema Products, Zeiss. “Since launching these lenses, we have been in constant contact with customers worldwide; we will continue to work on further enhancing this family. We also added the new lens in order to respond flexibly to our customers’ desire to close the gap between the 35 and 50 millimeter focal lengths.

“The lens family is known for its outstanding quality, light weight and the versatile look of its images,” added Casenave.

The Zeiss Supreme Prime lens family now consists of 14 prime lenses with fixed focal lengths between 15 and 200 millimeters; they also offer maximum apertures from T1.5 to T2.2. In addition, 11 of the 14 lenses have a fast T-stop of T1.5.

Zeiss Supreme Prime lenses cover large-format camera sensors. What’s more, they are compatible with the latest camera models, such as the Sony Venice, ARRI Alexa (Mini) LF and RED Monstro. The lenses are also able to create different visual looks, due to smooth depth of field and elegant bokeh. As a result, they are options for a variety of different film productions.

“We designed the Zeiss Supreme Prime lenses specifically for high-end productions. Since their launch, the lenses have been used in a variety of high-budget commercials and music videos, as well as in feature films, dramas, and TV series,” continued Casenave.

A key aspect of the lenses is their elegant bokeh with a very smooth transition between areas in focus and out of focus. In addition, the rugged lenses are lighter and more compact than comparable lenses. Most focal lengths weigh around 3.5 pounds.

The new lenses also incorporate Zeiss eXtended Data metadata technology, which launched in 2017. Subsequently, they provide frame-by-frame data on vignetting and distortion, in addition to the metadata provided by Cooke’s /i technology protocol. This streamlines workflows, particularly for VFX and virtual productions.