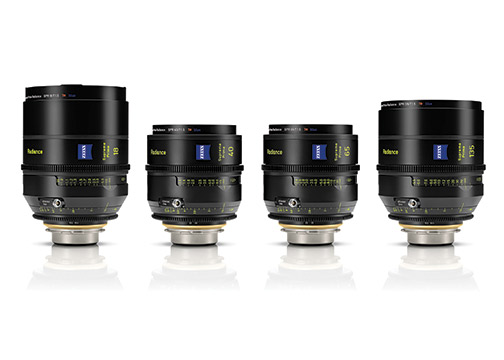 In addition, the new 40mm and 65mm lenses enhance the standard range. As a result, the Supreme Prime Radiance line is a self-contained series covering all applications for high-end film production. With a maximum aperture of T1.5, all eleven focal lengths offer high speed and realize fine nuances of light, even in low-light conditions.

Moreover, the lens family offers a distinctive look with the control of flare. Zeiss developed the Zeiss T* blue coating especially for this series to allow users to create this look across all focal lengths, without sacrificing contrast or light transmission.

“The Zeiss Supreme Prime Radiance lenses began as a variant and complement to our existing Zeiss Supreme Prime lenses; they have now evolved into a high-end cine set in their own right,” said Christophe Casenave, responsible for the cine portfolio at Zeiss.

“Their sophisticated, artistic design was so well received by the cine community that we are proud to expand the line with four new lenses, offering a comprehensive set of focal lengths for all kinds of artistic demands in cine productions.”

Every Supreme Prime Radiance lens offers all the attributes of cine lenses. With an image circle diameter of 46.3mm, they also cover current large-format cine sensors. In addition, they are compatible with current camera models. These include the Sony Venice, the ARRI Alexa LF and Mini LF, and also the RED Monstro.

They incorporate a uniform front diameter of 95mm as well as consistently positioned focus and aperture rings. And the rugged lenses’ average weight is about 3.5 pounds.

In addition, the lenses integrate Zeiss eXtended Data metadata technology, which launched in 2017. Consequently, they provide frame-by-frame data on lens vignetting and distortion in addition to the standard metadata provided by Cooke’s /i technology protocol. This simplifies and speeds up workflows, particularly for VFX and virtual production.

The new Zeiss Supreme Prime Radiance focal lengths are now available in a set of four lenses. Deliveries will start late May.