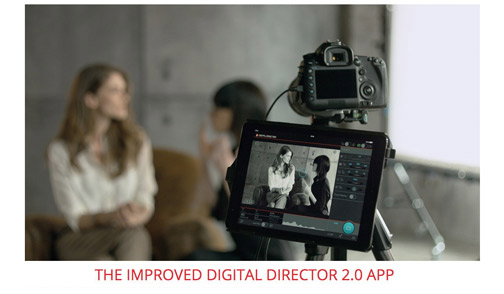 The Digital Director 2.0 includes new and improved features, particularly remote control of lights. It is available in the App Store for Apple iPads.

The app controls all Nikon and Canon DSLR key camera functions. It also turns an iPad into an interface that enables remote control of Manfrotto Lykos and Litepanels Astra LED lights (up to 13 lights) via Bluetooth. Users can remotely turn lights on/off and adjust dimming level and color temperature. They can also set up groups and configure multiple scenes directly from the iPad.

And from the app’s general settings, in the Digital Director options, it’s possible to set up new features. The implemented focus-peaking filter presents new options. Among them are the possibility to adjust the intensity of the filter. Users can also select the desired color for peaking (red, blue, green, yellow).

In addition, the new zebra filter helps to adjust exposure through striped patterns that indicate the overexposed and/or underexposed areas of the image.

New tools for postproduction are also provided. These include cropping free or with proportion, blur and saturation. Together with the existing functions (rotate, contrast, light, checking histogram and EXIF information), it may also allow users to make final adjustments on an image in just a single touch on the iPad screen.

The Digital Director 2.0 app also integrates new post-processing tools and gallery photo sorting. It also provides an image rating that is included in the .jpeg file shared from Digital Director via FTP and e-mail.

Manfrotto’ Digital Director is an Apple-certified MFi (Made for iPad Certification) electronic device. It connects a camera and iPad via USB cable, to help manage the photo and video workflow from the settings of a Canon or Nikon DSLR. It features a built-in Apple microchip that works with the 600MHz 256MB DRAM ARM Cortex-A8 microprocessor, simultaneously. This ensures communication between the iPad and the camera. The result is the ability to control all shooting parameters of different DSLRs, smooth video streaming between devices with low latency time, and an ultrafast, high-quality image download onto the iPad. manfrotto.us