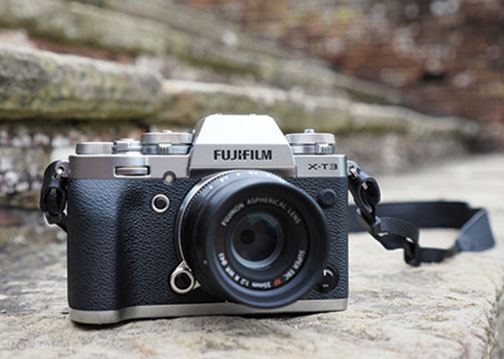 As a result, the X-T3 delivers improved autofocus (AF) and tracking performance of fast-moving subjects as well as blackout-free burst shooting. In addition, it is “the first APS-C mirrorless camera capable of 4K/60p 10-bit recording to meet the needs of professional videographers,” the company announced.

“We are proud to introduce the new X-T3 to market as not only the latest addition to our X series mirrorless lineup of digital cameras but as an introduction to fourth generation technologies that feature substantial performance enhancements over previous models, delivering high AF performance, superb color reproduction and outstanding image quality to photographers and videographers alike,“ said Yuji Igarashi, general manager, Electronic Imaging Division and Optical Devices Division, Fujifilm North America Corporation.

In addition, the X-T3 increases the low-light phase-detection AF of its predecessor by 2 stops, from -1 EV to -3 EV. This allows photographers to focus in low light for night photography. Plus, ISO 160 is now part of the standard ISO range. Previously, this was only available as an extended setting for use in bright scenes or when shooting wide open with a fast, large-aperture lens.

The X-T3 additionally adopts the color chrome effect from the Fujifilm GFX 50S medium-format mirrorless digital camera. It produces enhanced color gradation in saturated colors such as vivid-colored flowers with shadows. With the higher speed processing power of the X-Processor 4, this effect now can be applied during continuous shooting, not just single shots.

Another key feature is enhanced viewfinder performance, with the ability to track a moving subject in the 3.69-million-dot electronic viewfinder (EVF). The EVF offers a  magnification ratio of 0.75x.

Furthermore, the X-T3 is capable of continuous shooting at 11 frames per sec with its mechanical shutter and without the optional vertical battery grip.

Additional enhancements to the X-T3 include a 0.005-sec display time lag and an EVF refresh rate of 100 fps for smooth display of moving subject or when panning. Plus, a new sports finder mode for enhanced capture of moving subjects is useful for sports and wildlife photography. Also, photographers can start shooting when the shutter button is half-pressed, due to a new pre-shoot function.

Supported video formats include the H.264/MPEG-4 AVC as well as H.265/HEVC for greater data compression. This enables internal recording of 4K/60p 4:2:0 10-bit at a 200Mbps bit rate as well as simultaneous HDMI output.

In addition, the X-T3 sensor’s read speed was increased from the X-T2’s to achieve 17m-sec reading in 4K/60p video. This reduces rolling shutter distortion, while 10-bit color depth for video boosts the amount of color information 64x times compared to 8 bit. Moreover, 12 stops of dynamic range enable the capture of subjects with rich color gradation.

Also introduced in the X-T3 is a noise reduction algorithm and 4K inter-frame noise reduction. As a result, the minimum sensitivity for shooting F-Log footage was lowered from ISO 800 to ISO 640.

Inheriting the design of the X-T2, the new camera’s dials are also positioned on the top panel. In addition, it features a central viewfinder. The X-T3 also incorporates a lockable EVF diopter adjustment to prevent unintended adjustments while carrying the camera. And its touch-screen panel offers higher contrast, wider viewing angles and better functionality. The X-T3 has larger top-panel dials than the X-T2 as well as larger rear-panel buttons. The X-T3 also integrates the more pronounced press function of the X-H1’s front and rear command dials.

Furthermore, the optional vertical battery grip VG-XT3 accessory is dust and weather resistant. It is also capable of operating at temperatures as low as 14°F. The grip holds two additional batteries to increase the maximum number of shots to 1,100 (in normal mode). It also incorporates a shutter release button, focus lever, AE-L button, AF-L button, front and rear command dials, a Q button and an Fn button for vertical shooting.