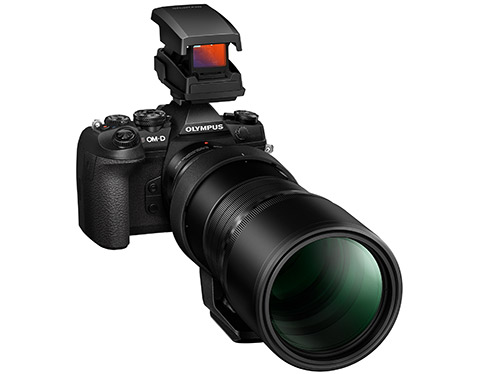 By synchronizing the in-lens image stabilization (IS) of supported lenses with the in-body 5-axis IS, the camera achieves the “world’s best” 7.5 shutter speed steps of compensation with 5-axis sync IS. This enables shooting handheld in dark locations and during super-telephoto photography without a tripod. Notably, in-body IS ensures image stabilization with all attached lenses, up to 7.0 shutter speed steps.

What’s more, the model offers a live ND function to create a slow shutter effect without using a physical ND filter. It virtually extends the exposure time and allows the capture of images with the appearance of a slow shutter speed by merging multiple exposures together. Users can select the effect level from ND2 (one step) to ND32 (5 steps) and view the effects in the viewfinder before capture.

The E-M1 Mark III also adopts pro capture mode to record scenes that are difficult to capture due to time lag in the subjects’ reactions or camera operation time lag. Recording begins upon the half shutter release, capturing 35 frames retroactively from the point of the full shutter release. Because there’s no blackout during shooting, it’s possible to keep an eye on subject movement while pressing the shutter button. RAW shooting is also supported.

The ILC also has various AF target offerings. AF target modes lets users select the best-suited AF target for the subject or its movement. There are six types of AF target modes: single, group 5-point, group 9-point, group 25-point, 121-point and small AF. Users can also customize the AF target area from 121 points. They can select from 11 vertical or horizontal points or an odd number of individual points to create a custom AF area.

Various creative features include live composite, which makes it possible to check exposure status in live view in real time. It also supports six hours of shooting. With B mode added to the shooting mode dial, live composite, live bulb and live time are now easier to access. In addition, focus stacking automatically creates a composite in-body from up to 15 frames. Focus bracketing enables photographers to shoot 999 images at different focus points to composite later using the software. And silent mode turns off the mechanical shutter and all electronic sounds.

For multimedia creators, the camera’s electronic stabilization combines with in-body 5-axis IS even during video recording. Its OM-D movie function makes handheld 4K/C4K shooting possible due to an IS mode specifically designed for video recording (M-IS1), with three levels of performance. The camera also supports OM-Log400, which guards against overexposure or loss of details in dark shadows and bright highlights.

Moreover, anti-flicker shooting (mechanical shutter only) detects the flicker of alternating light sources and reduces the effect by only shooting at peak brightness, reducing exposure variation. Flicker scan (electronic shutter only) minimizes the effects of flickering occur under LED lighting.

The OM-D E-M1 Mark III boasts a magnesium alloy body with advanced weatherproof construction for dustproof, splashproof and freezeproof performance. Further, to avoid extra retouching due to dust on the sensor, it has an SSWF (supersonic wave filter) dust-reduction system that vibrates the sensor at a 30,000 times per second to shake off dirt. The dust-resistant coating recently introduced on the OM-D E-M1X is also used on this model.