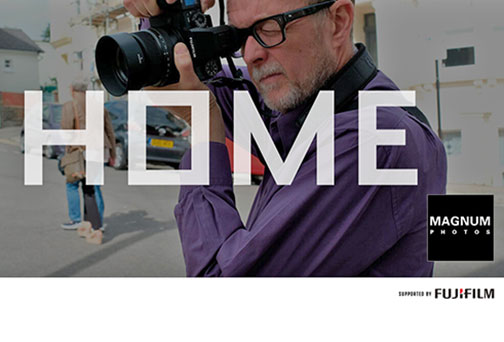 Las Vegas, NV—Fujifilm North America Corporation is collaborating with Magnum Photos on an international photography project that explores the subject of “Home.” Magnum Photos represents some of the world’s most celebrated photographers whose artistry combines an eye for documenting current events while taking on the role of storyteller.

For more than seven decades, Magnum Photos has delivered photos of the highest quality from around the world across a wide array of topics. The Home project was launched when Magnum Photos and Fujifilm invited 16 Magnum photographers to create visual short stories portraying the complex meaning of what “home” is in each photographer’s own style.

The photographers set out to consider the theme and were given an open brief to explore this subject. They were provided the mirrorless medium-format Fujifilm GFX camera system and/or various Fujifilm X-series digital cameras to produce their individual visions of the concept.

“This global collaboration celebrates world-renowned artists and the distinguished photographic tools we produce to help them create timeless works of art,” said Yuji Igarashi, general manager of the Electronic Imaging Division & Optical Devices Division at Fujifilm North America Corporation. “Fujifilm Corporation is proud to empower this project and give the concept of ‘home’ new perspective.”

The project showcases just how different the idea of “home” is, despite it being a universal concept. A few photographers depicted it as a return to their childhood. Others focused on the geographical aspects of the topic.

Of the 16 Magnum photographers, six either shot their photographic projects in the United States or are based in the United States. Those photographers—Chien-Chi Chang, Elliott Erwitt, David Alan Harvey, Alessandra Sanguinetti, Alec Soth and Alex Webb—take us on their personal journeys that depict and reflect their unique ideas of home, beyond the physicality of space.

The Home project is now a global traveling exhibition of the photographers’ works. It will be held in 10 cities around the world, accompanied by a comprehensive photo book. The kick-off is scheduled for March 2–14, 2018 at Milk Gallery in New York City. All color prints at the exhibition will feature Fujicolor Crystal Archive paper.

The exhibition will also include a variety of photo events, many of which are free to the public. Lectures from renowned Magnum photographers are scheduled between March 3 and March 14. The photographers include David Alan Harvey, Mark Power and Alex Webb.

Other special events include a Curator’s Tour led by Pauline Vermare, Home curator and cultural director of Magnum Photos. There will also be a High Line Photo Walk at one of New York’s greatest park attractions. Fujifilm will lead it in partnership with Foto Care, a Fujifilm Premier Dealer.

In addition, Fujifilm will be holding free check-and-clean services that will be open to the public. All X-series and GFX system bodies as well as lenses are eligible. The services will be available on select days to coincide with the Home exhibition. Check-and-clean services include updated firmware (if available for model) and sensor cleaning (interchangeable X-series and GFX cameras only). Also provided is a general focus and function check.

Specific details regarding photographers, exhibition locations and localized programming can be found at HOME-Magnum.com.

Magnum Photos represents some of the world’s most renowned photographers. The organization maintains its founding ideals and idiosyncratic mix of journalist, artist and storyteller. Moreover, Magnum photographers share a vision to chronicle world events, people, places and culture “with a powerful narrative that defies convention, shatters the status quo, redefines history and transforms lives,” the organization announced.