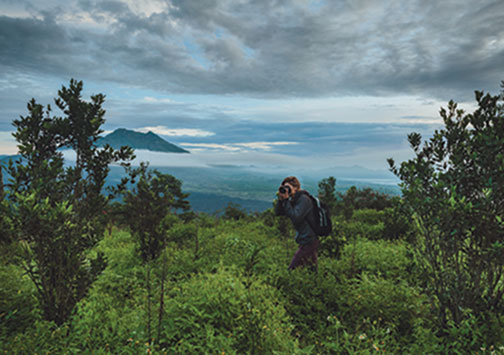 The line between still photography and video isn’t blurred; it’s gone. That’s the consensus of five high-profile multimedia artists and storytellers we quizzed to measure just how much these two art forms overlap.

Furthermore, virtual reality (VR) has established a solid and expanding foothold in the visual expression arena. Things have changed so significantly over the last few years that even these avant-garde, leading edge artists are themselves wondering exactly where technology will lead us.

Maring describes himself as a painter/photographer/filmmaker who constantly seeks to find inner meaning in a way that’s creative. He’s also a noted musician (his rock band is called Outside Reality) and markets an apparel line: Charlee Fine Art Fashions.

“Storytelling is my passion,” he told us. “It always has been. The quest began back when I started shooting weddings, because there is an innate story there—a kernel of a story naturally woven into every wedding.”

Based in Connecticut, Maring points to the great Monte Zucker as one of his inspirations. He added his greatest thrill as an artist was seeing photographic prints come to life in the darkroom years ago—an experience many new artists can never share.

Maring uses Panasonic Lumix cameras for stills and video. “I moved to Panasonic for both video and still photography, initially because I was carrying equipment for both and it was overwhelming. It was too much equipment. I was not able to concentrate,” he said. “But the Lumix GH4 allowed me to capture the moment however I felt at the moment.

“No big distinction when I’m shooting video,” he continued, “because I think like a still photographer while shooting it. As a still photographer, I work very slow and methodically, shooting 10 images, not hundreds. I like the idea of framing and composition in every shot, instead of trying to replace quality with quantity.

“We’re at the most exciting times in the history of creativity,” Maring noted. “We are experiencing the biggest renaissance in the history of art. Science is overlapping art and taking people further than they could have gone. The overlap is the most exciting part. For me, each medium influences the other in a positive way. When you learn one it helps with the others.”

Burkard is living the dream in central California as a photographer of “outdoor, travel, adventure, surf and lifestyle subjects . . . and images that are punctuated by untamed, powerful landscapes.” His career as a multimedia storyteller began in his high school art classes. It was then he found that traditional media was too restrictive and separated him from social settings—as well as the mountains.

“Photography made art mobile for me,” Burkard said. “I began shooting surfing and soon fell in love with landscapes. Ultimately I quit school and my conventional job and focused on what could take me somewhere. And I gave it 110%. Living in a small town without a passport,” he continued, “I was blown away that I could be creative and still see the world. For me, travel photography became a matter of filtering a complicated world.”

Burkard’s love affair with Sony Alpha cameras began about six years ago when he needed a small, reliable camera for a foul-weather assignment in Norway. Because he didn’t want to sacrifice quality, he chose Sony. Currently he uses several Sony mirrorless models, including the Alpha a7R III, a7S, a9 and the super compact a6500. He’s used Sony products in “the harshest conditions on the planet,” he said, and he has never been disappointed.

Burkard tells budding artists to leverage their strengths. “Don’t convince yourself that you do everything well: you’re hired because you’re the best at something. Don’t try to master everything. It’s a recipe for failure. A lot of young people want to show their diversity. But being able to do everything is a falsehood. Tune into what you can do best, hone that specialty, and understand that from there you can work on anything else. Study being a specialist and it opens up everything else.”

Laforet is a Pulitzer Prize winner with a long list of awards. His client list includes Apple, GE, Nat Geo, SI and Vanity Fair, to name a small fraction. His museum-quality book, AIR, contains a series of high altitude aerial photographs taken over 10 of the world’s most iconic cities.

In his early years, Laforet “dabbled in a bit of everything from music to all different types of 2D art,” he confessed. “My dad’s a photographer and he got me hooked. I haven’t put the camera down since.”

His unique, signature perspective—i.e., from above—began as a natural progression from his early background as a sports photographer. Shooting sports, there is only one chance to get a particular shot “ . . . with no chance for repeats.” Laforet was hired by Men’s Health to illustrate an article on the psychology of coincidence. His aerial view of New York City streets equates the roadways to the neural patterns in human brains.

Like the other artists who are witnessing the confluence of video and still photography—and taking it in stride—Laforet ponders the future of technology. “I’m very eager to see what happens with still and video over the next decade,” he said. “Video image quality is getting so good, one has to wonder what will happen to still photography.”

Laforet tells beginners to determine what makes them different as an artist and explore it. “Find something you care about,” he advised, “and follow that thread. Learn every rule and then break every one of them.”

Rich is a multimedia storyteller who happily proclaimed, “Embracing new technologies has been some of the most exciting experiences in my life.”

Rich is a California-based photographer and video director at Novus Select. He can identify the point in time when he realized that video and digital still photography had become inextricably commingled.

“When the Nikon D90* DSLR hit the market with full video capability, it became obvious that there was an opportunity to shoot both with the same camera,” Rich said. “No more pigeonholing as one or the other.

“At Novus Select, we work with storytellers for Fortune 100 companies around the world,” he continued. “Industry clients need both still and video. We put it all under one roof. We’re servicing what the industry was asking for. We do approach still and video projects separately, but it is all still storytelling—using light, sound, visuals. We can extract 4K and 8K stills from video footage, in certain scenarios that clearly makes sense. I think that will happen more and more in the future. The world of still photography will change significantly in the coming decade.”

A staunch Nikon advocate, his go-to outfit for still photos and video is the Nikon D850 and Nikon D5 DSLRs. “I love the D850 for video, especially when shooting without a crew,” Rich noted. But he cautions young artists from becoming too hung up on equipment and assignments. “The best advice is to spend your time making pictures instead of worrying about the camera system, how to get a job, etc. If you have great content, everything else falls in place. Sometimes folks get the cart before the horse. Focus on making great pictures.”

Manhattan-based YouVisit began as a means for clients—primarily colleges and universities—to provide fully interactive virtual tours to prospective customers. P.J. Morreale is senior director at YouVisit, and as such he is ideally suited to explain virtual reality.

“VR is being transported to a new environment, completely unrelated to the real world,” he explained. “VR is freedom, the freedom of being able to move around and interact. The potential is unlimited,” he added enthusiastically, “because the term ‘VR’ can mean so many things—problem solving, visual excitement, sensory experience. The definition will evolve over time. I mean, the definition of ‘flight’ 100 years ago would not have included space travel.”

The VR at YouVisit is driven by Aria, a software platform. Aria is the conglomeration of all of their technologies, which they break down into four distinct steps: Creation; Engagement (where storytelling meets technology); Conversion; and Optimization. Aria Optimize is the client portal that provides user metrics.

On the hardware side, the equipment list is eclectic. It includes a number of in-house rigs that use action sports sensors and rigs with a number of cameras: the Sony a7S II, Canon, a workhorse GoPro Odyssey, a number of 360º 3D rigs, a Kolor Abyss underwater scuba camera, “plus toys for scouting” and equipment for live streaming.

Morreale is a futurist. In the short term he sees the world of VR being smaller, lighter, cheaper and more accessible on capture and playback devices.

“More crossing into other senses, physical and tactile,” he said. “Near term, VR will hack more of the senses.” In the distant future, he sees “a possible era where we eliminate playback devices and we hit some physically dangerous thresholds where hardware is integrated with human bodies. A wormhole where you can step into another reality.”