Recognized by Congress in 1987 as a monthlong event in May, National Photo Month is a time to recognize that the best photos can be created at home, in towns large and small, and also in travels across the U.S. It’s in that spirit that consumers were invited to enter photos of their local community, historical family photos and photos taken in U.S. National Parks. 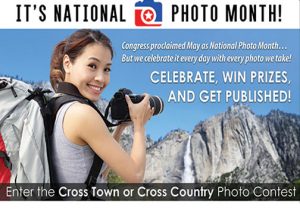 The grand prize winner was awarded a $500 U.S. savings bond. In addition, three category winners received a U.S. National Parks annual pass. The contest categories were Around Town, Last Century and Treasured Parks. Judging was conducted by the board of the Imaging Alliance.