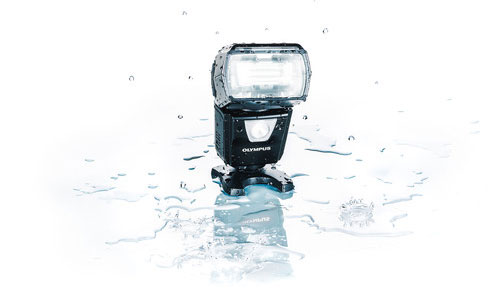 The compact, lightweight Micro Four Thirds system flash is dustproof, splashproof and freezeproof (14ºF). In addition, it pairs with the weatherproof Olympus E-M1 Mark II, E-M1 and E-M5 Mark II cameras as well as M.Zuiko Pro lenses for shooting in a variety of extreme conditions.

The FL-900R electronic flash is engineered to produce optimal lighting even in challenging environments when combined with the camera’s built-in TruePic processor and TTL metering. Photographers are able to cover an angle of view for a focal length range of 12–100mm (24–200mm in 35mm equivalent) and 7–10mm (14–20mm equivalent) when using the built-in wide panel.

In wireless RC mode, wireless control capabilities make high-intensity, multi-flash photography seamless. From the camera, users can control up to four flash groups. They can select whether or not a group fires, compensate for flash output and also adjust settings. The flash is also equipped with a wireless remote function. It can be attached to a camera’s hot shoe to be used as the commander flash when using the commander function. An IR filter is also included for when visible light from the commander flash isn’t needed.

Multi-flash mode is available on the new E-M1 Mark II camera for capturing subject motion. When the FL-900R is paired with the E-M1 Mark II, users can set the flash output, the interval and the number of times the flash fires to capture subject motion in a single image.

The flash unit’s built-in LED light has a maximum power of 100 lux at 1m. It supports video capture and is compatible with lenses with a focal length of 12mm (24mm equivalent) or higher.

The Olympus FL-900R electronic flash unit will be available beginning in October 2016 for an SRP of $579.99. olympusamerica.com