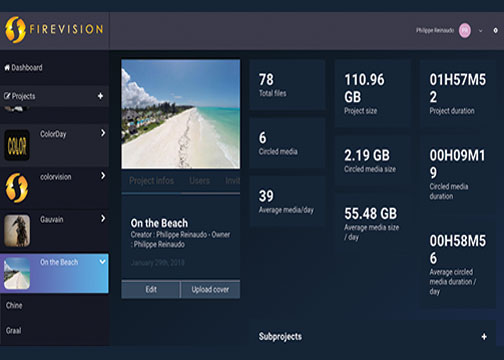 The collaborative approach of the cloud-based tool is designed to enable teams to view and select videos, regardless of the format in which they were shot. These formats include ARRIRAW, R3D and Sony RAW. With FireVision, users can create tags, mark circle takes, make frame-accurate comments and approve digital dailies all from within a web-based interface.

Also included with FireVision are robust rights and access management features. These help ensure that team members only have access to the footage they are allowed to work on—according to their role and function. Once media files are stored in the cloud, versioning mistakes are minimized and security is enhanced compared to moving physical copies over unsecured paths, according to the company.

“FireVision enables teams to work together wherever they are located. Whether it’s on-set or in the postproduction suite, using whatever file format they need,” said Philippe Reinaudo, FireFly Cinema’s CEO. “It’s designed to shorten approval cycles and simplify versioning. It makes teams more efficient, enabling them to focus on the creative process rather than the management of the workflow.”

FireVision is compatible with FireDay, FireFly’s solution for dailies. FireDay users can back up, color grade and sound sync their RAW files and upload them to the cloud.

Also at NAB, FireFly Cinema will introduce v7 of its color-grading software suite. The suite includes FirePlay for playback, FireDay for digital dailies and FirePost for color finishing.

The applications are now said to be faster, less complicated and more affordable for independent filmmakers as well as big budget features. Thanks to its SaaS (Software as a Service) licensing model, productions pay only for what they need when they need it.