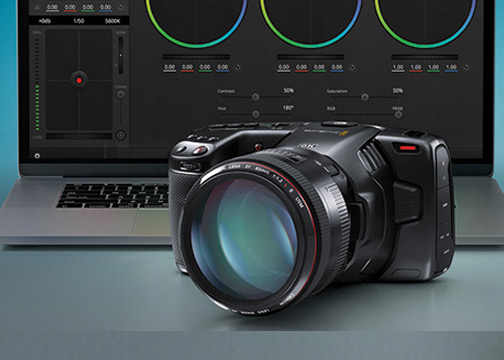 Fremont, CA—A new lower price of $1,995 was announced for the Blackmagic Pocket Cinema 6K camera 6K. The reduction of $500 will help make the camera more affordable for those working on digital film as well as live production with the new ATEM Mini switchers.

With the current demand for multi-camera livestreaming from home broadcast studios, the Blackmagic Pocket Cinema 6K camera is a solution when combined with the recent studio camera software update.

“We have worked very hard to build this camera at a lower cost; we think even more people will be able to take advantage of this price reduction to move into a more advanced and much higher quality digital film workflow,” said Grant Petty, Blackmagic Design’s CEO.

“This has become more important with Covid-19. Many broadcasters have set up home studios for presenters, which have used ATEM Mini switchers and Blackmagic Pocket Cinema cameras. We think with the recent software updates for switcher control of the Pocket Cinema cameras from the ATEM Mini switchers, combined with this more affordable price, it will greatly help this workflow.”

The Blackmagic Pocket Cinema camera now works as a studio camera for live production when used with the ATEM Mini. Video and control are via the HDMI connection, which is available as soon as the cameras are plugged in.

Moreover, the record light becomes a tally light so everyone can see which camera is on air. In addition, the ATEM Software Control camera page has a camera control unit (CCU) style interface for adjusting and matching cameras. Move the CCU control vertically for iris and left to right to adjust black level. It’s also the same as a broadcast CCU. In addition, there are controls for color tint to balance the camera as well as focus, gain and shutter speed. Shooters can also ISO record Blackmagic RAW in the camera for editing later.

Furthermore, the miniaturized, handheld device is made from lightweight carbon fiber polycarbonate composite. The camera features a multifunction handgrip with all controls for recording, ISO, WB as well as shutter angle at a fingertip.

In addition, it employs a larger 6,144×3,456 Super 35 image sensor and EF lens mount. As a result, filmmakers can use larger EF photographic lenses to create cinematic images with shallower depth of field. This enables creative defocused backgrounds and bokeh effects.

Blackmagic Pocket Cinema cameras also provide 13 stops of dynamic range. Consequently, they preserve more detail in the lightest and darkest areas of an image. This also permits filmmakers to set exposure for an indoor scene and retain the details of bright outdoor light coming through a window, for example. 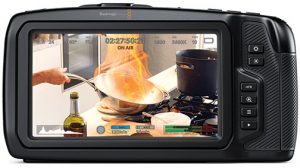 Also featured are built-in CFast and SD UHS-II card recorders, as well as a USB-C expansion port for recording direct to an external media disk. The camera supports regular SD cards for HD or higher performance UHS-II and CFast cards for native 4K or 6K when using Blackmagic RAW. In addition, the ProRes and Blackmagic RAW files work with all video software.

Both Blackmagic Pocket Cinema cameras have a mini XLR input with 48 volts of phantom power for connecting professional microphones, including lapel mics and booms. The four built-in microphones have a low noise floor and are shock and wind resistant. There’s also a 3.5mm audio input for connecting video camera style microphones; a built-in speaker for playback; and a 3.5mm headphone jack.

Blackmagic RAW is a new format for capturing and preserving the quality of the camera’s sensor data. Video formats such as H.264 are highly compressed, plus add noise and artifacts. Blackmagic RAW eliminates this problem, retaining detail and color throughout the production pipeline from camera to edit, color and mastering. It also saves camera settings as metadata. Subsequently, filmmakers can set ISO, white balance and exposure in-camera or override them later while editing. 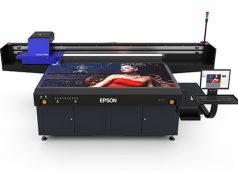