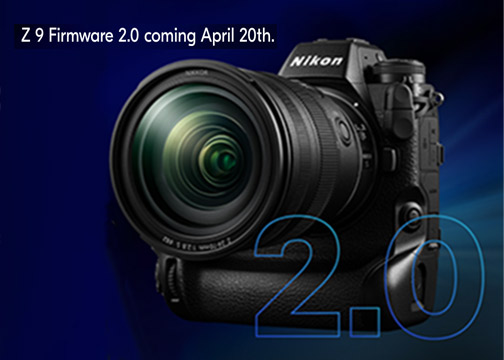 Melville, NY—Nikon Inc. announced major feature additions to its flagship mirrorless camera. Nikon Z 9 cinema as well as video production capabilities are available through a free firmware upgrade. Moreover, the upgrade is Nikon’s most comprehensive to date. The goal: to solidify the role of the Z 9 as the ultimate hybrid camera for filmmakers, videographers, photographers and creators.

Enhancements include in-camera 12-bit RAW video at up to 8K 60p; oversampling at 4K UHD 60p; as well as a new pre-release capture function that increases the odds of catching hard-to-predict moments.

In addition, Nikon also announced it upgraded the AF performance and provided other improvements with firmware v1.4 for the Z 6 II and Z 7II cameras. Further, it revealed the development of the MC-N10 remote grip.

“The Nikon Z 9 is considered by many to be the most powerful and versatile camera on the market. With the most extensive combination of powerful stills and advanced video capture abilities available today, it’s our most successful flagship camera ever,” said Jay Vannatter, executive vice president, Nikon Inc.

“Now the best is getting even better. These latest updates are just another example of the Z system’s ability to rapidly evolve and gain features and usability by using our customers feedback.”

At the forefront of the comprehensive firmware upgrade are enhancements for Nikon Z 9 cinema and video capture. Chiefly, 12-bit internal RAW video recording is possible in various frame rates and resolutions. RAW video allows for extreme latitude with tonality, with a range of more than 68 billion colors for flexibility when grading or consistency as part of a multi-camera production.

Functionality and interface adjustments were also made specifically for videographers. The Z 9 can now capture footage at up to 8.3K 60p with Nikon’s N-RAW format; or up to 4.1K 60p in ProRes RAW HQ. Consequently, the Z 9 can capture the largest possible color depth and dynamic range for flexibility when color grading and in postproduction.

Nikon’s new N-RAW (.NEV file) packs the depth and detail of 12-bit RAW video into a file half the size of equivalent ProRes RAW HQ files for a lighter workflow. What’s more, the new video options take advantage of the Z 9’s full-frame sensor, with N-RAW footage captured at up to 8.3K (8,256×4,644), allowing for export in UHD or DCI 8K aspect ratios. The high resolution allows users to add effects such as zooming, reframing as well as trimming of 4K content.

Furthermore, a red “REC” frame indicator on the monitor and viewfinder was added to identify when video is being captured. A waveform monitor was also added to confirm the brightness levels and position of the subject while recording.

In addition, there is a new dedicated video info display that shows video recording settings at a glance. They comprise frame size and rate; audio settings; codec; bit depth; and HDMI output settings. A frame rate/size display on the top control panel also helps to confirm when the rear monitor is difficult to view.

Another new addition is “Fine ISO control (mode M)”; it facilitates exposure adjustment in increments of 1/6 EV for precise, smooth changes. Plus, to enable slow shutter recording of extremely dark scenes or intentional blur when shooting video in M mode, cinematographers can set the shutter speed at a slower than 1/frame rate.

Firmware 2.0 for the Z 9 also adds still photo features, including enhancements to autofocus and high-speed image capture. For the first time in a mirrorless full-frame camera, a pre-release capture feature acquires hard-to-predict moments easier. When shooting at 30 or 120 frames per sec with its high-speed frame capture+ function, the camera starts capturing up to one full second before the shutter is fully depressed.

As a result, photographers have extra time to trigger the camera and capture the most impactful shot. Moreover, when half-pressing the shutter, the camera records frames up to one second before and up to four seconds after the shutter is fully pressed. And this is done with no viewfinder blackout.

Twenty custom wide-area AF selection patterns were also added. This gives users more control over what part of the frame they want to focus on.

Moreover, the new retouch menu feature, “motion blend,” creates an in-camera overlay from a series of subject movements from continuous shooting into a single picture in-camera. For example, photographers can capture a snowboarder’s aerial from start to finish sequentially in one finished frame.

Other features include the improvement of AF stability, tracking performance and subject detection in low light; and enhancement of the Z 9’s long exposure display to include a live count of the exposure time. Users also can now dim the viewfinder further to preserve power and their night vision.

Firmware 2.0 adds the high fps viewfinder display function to increase the refresh rate of the real-live viewfinder to 120 fps for a more lifelike view. And autoexposure (AE) was improved to have more stable exposure with human faces, such as when a subject turns away from the camera and then faces it again. Also, to confirm high-speed shooting, visual shutter release indicators appear on the display and the viewfinder.

Improved “prioritize viewfinder” monitor mode now gives a familiar shooting and review flow. Plus, “prefer sub-selector center” was added to the custom menu, improving the operability of the sub-selector. There are also improvements in AWB and preset manual WB.

Development of the MC-N10 Grip

It can control various functions of Nikon mirrorless cameras, increasing the efficiency of video recording with a small crew. It also supports still shooting. The company will release more details, including pricing and availability in the future.

What’s more, Nikon introduced its MC-CF660G CFexpress (Type B) memory card with a capacity of 660GB.

Specs state it realizes a maximum read speed of approximately 1700 MB/s as well as a maximum write speed of 1500 MB/s.

The Nikon MC-CF660G CFexpress card will ship in June. It will have a suggested retail price of $729.95.