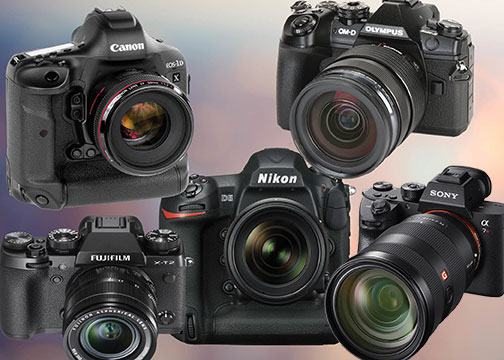 The majority of professional photographers and videographers today are multimedia or crossover shooters. Indeed, the ability to turn out pro-caliber video as well as topnotch still images is essential in specialties ranging from wedding and advertising photography to documentary photojournalism.

That’s why so many working pros gravitate to cameras like the pro ILC models detailed here. All of the cameras we’ve selected can capture 4K UHD video (3,840×2,160 pixels) or DCI 4K video (4,096×2,160 pixels) at 30 frames per second. And many also provide sophisticated pro video Gamma profiles such as S-Log2, S-Log3 and Log Gamma-F that flatten the curve (lower the contrast) to extend the dynamic range and facilitate postproduction tonal adjustments.

Whether the customer on the other side of your counter is an established or emerging pro, or a serious enthusiast just getting into high-end video, these are the cameras that will deliver for them big-time—and for you.

Nikon’s top DSLR provides the speed, precision and high-end capabilities pros demand when shooting 4K video or high-res photos. It integrates a 20.8 megapixel, FX-format (35.9×23.9mm) CMOS sensor with a top-end Expeed 5 image processor. They deliver a full-res burst rate of 12 frames per second for 200 shots with full AE/AF, and sensitivity settings of ISO 100–102,400 that are extendable to 3,280,000!

Using the WR-R10 wireless remote controller, the D5 can control and fire six groups of Speedlights up to 98 feet. Other key features include: a 3.2-inch, 2.36M-dot, touch-screen LCD monitor; dual CF/XQD card slots; an AF fine-tune function; a 400,000-cycle-rated shutter; 1000Base-T Gigabit wired LAN support; and an intelligent scene recognition system that uses Nikon’s 3D color matrix 180,000-pixel RGB sensor. This is all built into a weather-resistant body with a magnesium alloy chassis and a textured grip. $6,499.95*. nikonusa.com

Other features include: Wi-Fi and Bluetooth connectivity; weather-sealed magnesium alloy construction; and a 500,000-cycle shutter with a reduced-vibration design and an electronic front shutter curtain that provides a silent shooting mode. $3,199.99. sony.com

Other features include: built-in wireless connectivity that links it to iOS and Android devices using an intuitive QR code connect system; a customizable multifunction control array similar to that in high-end pro DSLRs; and a rugged dustproof, weatherproof magnesium alloy body. $1,999.99. olympusamerica.com

Videographers can record to an SD card while simultaneously feeding a live signal through the GH5’s HDMI port connected to an external monitor or recorder. The camera also has a maximum full-res burst rate of 12 fps with continuous AF and low noise performance at ISOs to 25,600. Its 10-bit color capability means it can record greater color subtleties. And its 6K and 4K photo modes let shooters output impressive quality still images from video clips.

Other video features include Full HD (1,920×1,080) at 60p/50p/30p/25p/24p and HD video recording. With the addition of an optional vertical power booster grip, it will record for up to 30 minutes. There is also a 3.5mm microphone jack for more advanced audio solutions.

Nikon’s widely anticipated full-frame upgrade is the first of the breed to combine a new 45.7MP BSI CMOS sensor with no optical low-pass filter and a cutting-edge Expeed 5 processor. That combo delivers a full-res burst rate of 7 fps that can capture 51 compressed, lossless 14-bit RAW files with full AE/AF and sensitivity settings extendable from ISO 32 to ISO 102,400.

Other features include: a Multi-CAM 20K 153-point AF system with a choice of 24-, 72- and 153-point dynamic-area AF zones and fine-focus tuning capability; autofocus down to -4 EV for capture in near darkness; a 3.2-inch, 2.36M-dot, tilting, touch-screen LCD; a 180K-pixel RGB sensor; and a focus-shift mode that allows sophisticated focus stacking of up to 10 image layers.

In addition, The D850 has a negative digitizer for optimized conversion of film negatives and slide images to high-res digital files. It also incorporates Nikon’s SnapBridge with Wi-Fi and Bluetooth connectivity. Plus, it’s all packed into a robust, dustproof, weatherproof body with a magnesium alloy chassis. $3,299.95. nikonusa.com

This is the latest iteration of Canon’s hugely successful EOS 5D DSLR series widely used by professionals and serious enthusiasts. This model delivers exceptional image quality and fine detail thanks to its 30.4MP, full-frame CMOS sensor integrated with Canon’s state-of-the-art Digic 6+ image processor. The pair provides DCI 4K (4,096×2,160) video capture at 30/24 fps plus 4K, 8.8MP full-frame still grabs. Other video options include Full HD recording at up to 60 fps and HD up to 120, as well as movie servo autofocus options.

A native ISO range of 50–32,000 is extendable to ISO 102,400. And it boasts a full-res burst rate of 7 fps, with images storable on both CF and SD cards. Also notable are a 61-point high-density reticular AF system with an AF-area select button; Dual Pixel CMOS AF technology with enhanced subject tracking; and Dual Pixel RAW technology that allows users to fine-tune image parameters, including bokeh shift and micro focus adjustment, after the picture is taken.

Other features include: a 3.2-inch, 1.62M-dot, touch-screen LCD to complement its bright pentaprism-type, eye-level optical viewfinder; and built-in Wi-Fi connectivity with NFC and GPS. Its resilient body has enhanced ergonomics that include a front-mounted N3 remote port, weather resistance and a new mirror vibration control system to maximize sharpness in handheld exposures at low shutter speeds. $3,499. usa.canon.com

Sony’s pro flagship A-mount model looks and feels like a DSLR, but it’s actually an ingenious hybrid design that employs a stationary translucent mirror to divert part of the light passing through the lens to its advanced AF system sensors. The result: It provides full-time AF before, during and after the exposure, crucial when shooting video or high-speed bursts.

Its professional performance parameters also include a full-frame, 42MP Exmor R BSI CMOS sensor, a Bionz X image processor and front-end LSI that enable sensitivity settings up to ISO 102,400, plus a state-of-the-art AF system. The hybrid AF system has 399 on-sensor phase points for vertical detection and a second 79-point array (with 15 cross-type points) for horizontal detection.

A Quick Take on Video Lenses

Many experienced video shooters use cine lenses designed specifically for video. Cine lenses are almost always parfocal—they maintain focus as you zoom or change apertures. They have aperture rings without click stops so you can change apertures smoothly and silently.

They also feature long-throw zoom and manual focus controls with silky smooth action. And their zoom and focus controls usually have external gear teeth that mesh with integral or add-on servo-control units. Most are calibrated in T-stops, are built to very high standards, and feature rugged, weatherproof well-sealed construction.

Cine lenses are the gold standard, but they’re expensive, and they can be bulky. That’s why many pro video shooters also rely on high-performance lenses designed primarily for still photography. Here’s an abbreviated selection of both types.

A high-performance cine zoom. Its 9-bladed iris provides round out-of-focus highlights for natural-looking bokeh. Moreove, the barrel features 180° of rotation from close focus to infinity, the zoom barrel rotates 160° and the clickless iris ring features 60° of rotation. In PL, Sony E or Canon EF mount, $3,999. sigmaphoto.com

*All manufacturers’ suggested retail prices are body only.