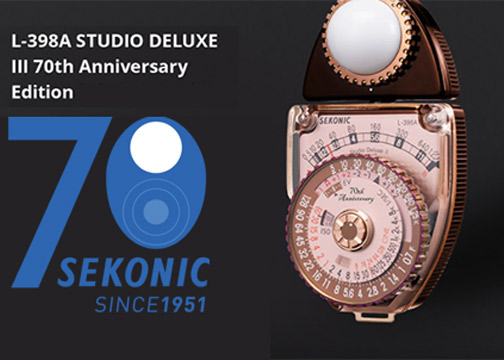 Tokyo, Japan—Sekonic Corporation unveiled the special limited-edition L-398A Studio Deluxe III to celebrate its 70th anniversary. Sekonic will release the limited-edition meter starting October 2021. Since its first meter in 1951, Sekonic has designed and manufactured light-measuring instruments for the photographic and cine/video industries.

Based on the original 1956 version of the Studio Deluxe meter, this limited edition of 700 is available in burgundy and rose gold. The meter will come in a Japanese lacquer box with cushioning. It will also include a special leather case and strap, as well as a 70th anniversary edition plate.

“From our humble beginnings, when the first Sekonic light meter was created in 1949 and two years later when the company was established as Seiko Electronic Co. Ltd on June 1, 1951, we never lost sight of our design and engineering passion,” said Kenji Sawai, director and COO of Sekonic. “Over the years, the studio deluxe series became symbolic of the Sekonic brand. Today, the L-398A Studio Deluxe III continues to be a favorite of traditional photographers, educators and seasoned cinematographers.”

The L-398A pays homage to the original Norwood Director and its self-powered design. The Sekonic L-398A Studio Deluxe III has been a mainstay of working photographers and cinematographers for four decades. Small, compact and designed for ease of use, the meter incorporates an amorphous photocell that eliminates the need for batteries. Subsequently, users can take ambient light readings anywhere, anytime.

Key features include the instant reading of the full range of aperture/shutter combinations; as well as a swivel head to position incident dome and maintain full view of its display. It also provides continuous reading plus a needle lock for easier, accurate readings.

What’s more, its analog dial gives the full range of exposure settings for both still and cine applications at a glance. The analog needle also indicates the brightness in foot-candles.