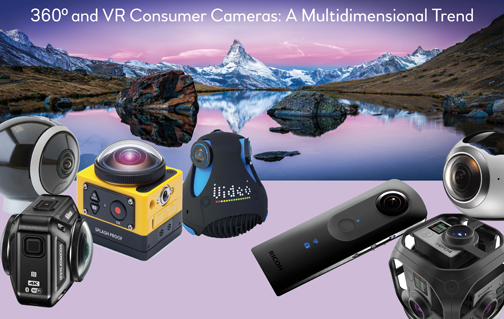 Virtual reality and 360º video are evolving from being highly specialized professional applications to an increasingly easy-to-master consumer pastime. With YouTube and Facebook now supporting VR video, it’s going to become ever more popular.

There are basically two types of consumer VR cameras, most dubbed 360º cameras by manufacturers: cameras with single, dual or triple lenses; and arrays with sets of multiple cameras. The multi-lens cameras are more common, easier to use and less expensive than multiple camera arrays. Many multi-lens cameras are ball- or cubed-shaped devices that are versatile and highly portable. This makes them ideal for consumers to easily document anything from their daily activities to special events and extreme sports in a way that wasn’t financially or technologically possible before.

One of the main problems, or at least limitations, of multi-lens VR cameras is lens distortion. The wide-angle coverage required to capture up to 200º distorts captured images. The more lenses that a multi-lens camera has, the smaller the field of view is required, resulting in less distortion. But all multi-lens VR cameras suffer from distortion to some degree. There’s considerably less, if any, distortion with VR camera arrays. Just like with cameras with more lenses, arrays with more cameras cut distortion. So they’re more suited for serious documentation and presentation creation.

Seamlessly combining the data streams from multiple sources has, until relatively recently, been a challenge for consumer VR software. But there have been major advances over the last year or two. Sophisticated software, which is sometimes integrated into the camera or comes bundled with it, takes the data streams from the multiple lenses within one camera or multiple individual cameras and stitches them into seamless videos.

While most consumer VR cameras don’t have LCDs to watch or review captured images, digital data can be transmitted and viewed via Wi-Fi and apps on iPhone and Android smartphones. But VR headsets are actually the best way to get a realistic feel of virtual reality. They can also be controlled directly from, and audio can be monitored on, those phones.

Nikon KeyMission 360. One of the newest 360º cameras is Nikon’s KeyMission 360, which was introduced at CES earlier this year but isn’t due out until the fall. It’s a small, dual-lens black cube that can capture two hemispherical UHD 4K images at 3,840×2,160-pixel resolution simultaneously, for full horizontal and vertical 360º views. The KeyMission 360 action cam is particularly well designed for capturing, well, action. It’s waterproof down to 100 feet, shockproof if dropped from 6.5 feet, and integrates electronic image stabilization. The official price hasn’t been set, but it’s expected to reach the market for under $500. nikonusa.com

Kodak PixPro SP360. Another VR action cam, the SP360 has a 12 megapixel CMOS sensor and a 235º ultrawide curved lens that uses optical image stabilization. It can capture 360º of a single hemisphere (in other words, a full circle of 180º). To capture full 360º coverage of a full sphere, two SP360s can be paired back to back. It takes 4K equivalent and 1080p Full HD video as well as 10MP still images at up to 10 frames per second. Being shockproof, dustproof and water resistant, the palm-size cam is designed for used in a wide range of harsh environments, with temperatures as low as 14º F. The cam supports microSD cards up to 128GB. An RF remote control is sold separately, but the SP360 can be controlled wirelessly via a smartphone app. $449. kodakpixpro.com

Samsung Gear 360. This spherical VR camera comes equipped with two 15MP sensors and utilizes dual f/2 fisheye lenses that each capture 180º horizontally and vertically to create a 360º field of view. The greater the digital content overlap, the smoother the VR effect when transitioning between the coverage of the two lenses. The Gear 360 captures video at 30 fps with 3,840×1,920-pixel resolution as well as 30MP still images when shooting in the dual-lens mode. A single-lens mode is available for action cam recording. It also supports microSD cards up to 128GB and has built-in Wi-Fi, Bluetooth and NFC. The Gear 360 is splash- and dustproof. Pricing will be announced closer to its mid-2016 release. samsung.com

Ricoh Theta. Ricoh Imaging’s Theta 360º spherical camera series includes the high-end S model. The S is an elongated dual lens unit that’s shaped more like a pocket-size digital voice recorder than a camera. Its form factor makes it one of the easiest VR cameras to take along just about anywhere. It’s designed around two back-to-back 1/2.3-inch sensors to produce 14MP quality, with f/2 lenses that focus from infinity down to a close 10cm. It doesn’t include external memory support but can capture 25 minutes of 1,920×1,080, all-directional video on 8GB of internal memory. The Theta S has some interesting still imaging capabilities. It can capture up to 1,600 images at 5,376×2,688 resolution, and exposure modes include auto, shutter priority, ISO priority and manual. It supports two-stop exposure compensation, ISO settings up to 1,600 for low-light photography, advanced white balance control, and shutter speeds up to 1/6,400 second for high-speed photography.  $349.95. ricohimaging.com

Giroptic 360cam. One VR camera that has gotten a lot of attention during the last year and a half or so is Giroptic’s 360cam—a small, bulbous camera that looks a little like an alien’s head. It has three 185º lenses for 360ºx300º video coverage. It can capture 2K video at 30 fps and 4K still images. Captured video and still images can be stored on the removable microSD card, and its three built-in microphones capture what Giroptic calls 3D audio. The 360cam is waterproof down to 30 feet and supports geotagging with built-in GPS and Wi-Fi, so it’s ideal for action and adventure coverage. Shooting modes include photo, video, live stream, time-lapse and photo burst. It’s highly anticipated, but production has been delayed several times. It’s now scheduled to ship late April/May. $499. us.360.tv

IC Real Tech ALLie. Unlike the action cams that clip to selfie sticks, helmets and handlebars for on-the-go coverage, the ALLie camera is intended primarily for home use (or offices and other interior environments). With its dual-lens 360º hemispherical coverage, it might, in effect, be called a VR baby cam. But the company says it’s perfect for allowing remote family members to virtually attend an event, using two-way mics, or for live streaming concerts. The ALLie comes equipped with two fisheye lenses, each with its own 8MP, 2,048×2,048-pixel sensor. It can capture images at up to 20 fps, and live streaming to YouTube and Facebook is possible. When paired with its smartphone app, it’s possible to interact live with the camera, or review captured VR video by swiping in any direction. $499. allie.camera

For more serious applications, consumers might be wise to consider a camera array.

Elmo has the QBiC Panorama X camera system that utilizes four of the company’s QBiC MS-1 XP cameras and a rig mount for recording vertically 180º and horizontally 360º to create panoramic video. Each camera stores captured digital content on its own microSD card. The content from the four cameras is stitched into spherical, 360ºx180º, 4K x 2K clips. Fully configured, it runs less than $1,400. elmousa.com

Along the same lines, there are several VR options for GoPro action cams, like the Freedom360 mount and its own GoPro Omni. The Omni is a six-camera array with pixel-level synchronization that’s designed to make stitching in postproduction more precise and easier. The Omni provides 8K, 360º videos. The package includes GoPro Kolor software, six Hero4 Black action cams, six microSD cards with readers, a waterproof case, plus Autopano Video Pro and Autopano Giga for precise control over the image and stitching. The package will set consumers back $4,999.99, but the rig can also be purchased alone for $1,499.99. gopro.com

As the cost of both camera arrays and multi-lens 360º cameras continues to go down and the cameras become even easier to use, more and more consumers will be capturing their day-to-day activities and posting them on social media in virtual reality.