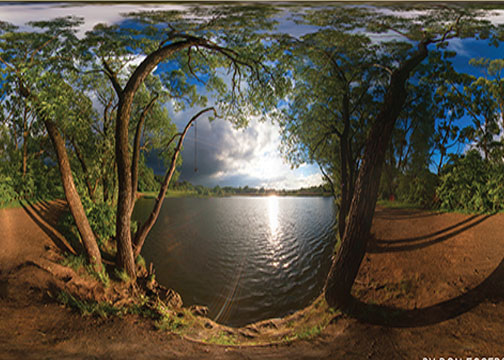 The quality of content that VR cameras (virtual reality) can produce is increasing all the time, while prices are continuing to come down.

One component of VR that is getting more attention is audio. Until recently, a single microphone was considered sufficient to capture audio. Now there are some higher end systems that have multiple directional mics. As you turn to look in a specific direction, you pick up the sounds of that direction, increasing the immersive experience.

Whether working with consumer cameras, midrange equipment or high-end gear, the VR creation process is pretty much the same. The individual data streams from multiple lenses or multiple cameras in an array are seamlessly stitched together to form continuous segments in anywhere from 180º to 360º video.

Consumer models with one or two lenses that are frequently used for live streaming have always had the capability of internal image compilation. But not that long ago, higher resolution, multi-lens systems still required post processing. Increasingly, however, more and more multi-lens systems are handling processing internally. Since the data is coming from multiple individual points with multi-camera arrays, stitching for those types of high-end systems is still computer or special software based.

True virtual reality means capturing the environment 360º both horizontally and vertically. Whatever direction someone viewing a VR video with a special viewer (or smartphone adapter) turns, left or right, up or down, there’s captured video content.

Moreover, not all cameras advertised as VR cameras actually are. There are some consumer systems with multiple lenses and some high-end camera arrays with individual cameras placed horizontally around a central axis. That means there’s no video content when looking straight up or straight down. For most applications, 360º wide-angle horizontal coverage is sufficient.

On the low-end, 360º coverage is achieved through cameras that have two or three very wide-angle lenses integrated into them. The upside for these cameras is that they’re relatively inexpensive. The downside is that the video they capture is frequently of limited quality and distorted.

The list of 360º VR cameras either already on the market or just about ready to ship is expanding rapidly.

On the consumer side, models like the Kodak PixPro SP360 4K, Nikon KeyMission 360 and Humaneyes Vuze have been covered extensively here, so I’m not going to go into detail about them, other than to say they’re among the most popular units on the market. They have proven track records for dependability and functionality, and they absolutely deserve a look when buying a consumer VR camera. Let’s take a closer look at some other VR cameras.

One recently introduced consumer model is the Samsung Gear 360—a small, mushroom-like unit with a bulbous head. It’s sometimes labeled the Gear 360 (2017) to differentiate it from the previous, less techie model.

This version has an 8.4 megapixel, wide-angle hemispherical lens on each side for full 360º 4K video coverage. It can also capture 15MP JPEG still images. Its maximum frame rate at full resolution is 24 frames per second. However, it is possible to go up to 60 fps for much more fluid VR at lower resolutions.

For output, it features five viewing modes. This makes it easy to personalize content without directly affecting the captured data, which is stored internally on microSD cards. It also has a USB 2.0 port and both Wi-Fi and Bluetooth or direct data downloads.

The Gear 360 can also live stream directly to online platforms. In addition, its IP53 water-resistant rating makes it possible to use it in adverse weather. The camera can be controlled through a smartphone, and it supports geotagging. $199.99. samsung.com

Its high-speed transfer is 2.5 times faster than previous Thetas, to more quickly wirelessly upload 14MP stills and 4K video. Omnidirectional audio recording also permits 360º audio to enhance the scene’s realism. With 19GB of memory, the camera can be controlled by smartphones with the Theta S app. Connection can be via Bluetooth LE or Wi-Fi.

Another new feature is that Ricoh can create functions for the camera via software plug-ins. The first of these, already integrated, allows the camera to deliver the first remote playback capability in a commercially marketed, fully spherical camera. Using a wireless display adapter, it’s possible to mirror playback of the camera’s 360º content, permitting users to enjoy it on a large screen or via a projection display. $429.95. ricohimaging.com

Another camera targeted at consumers is the shockproof, water-resistant 360fly 4K video camera. Unlike some consumer models that utilize dual 180º lenses to cover a full 360º, it comes with a single 240º lens situated on top of the body. Besides video, it can also capture 16MP still images. The lens’s configuration makes it possible to get a full 360º horizontal, circular view. The company calls it “surround video.” The only visual content missing is the lower part of the sphere.

It’s also possible to tilt the camera with the lens facing forward for a 190º horizontal point of view. There’s no having to stitch images together, but since the camera has such a wide-angle fisheye lens, the captured video is somewhat distorted. The small ball-shaped 360fly captures data at 2K resolution and stores it on 64GB of internal memory. It also supports both Wi-Fi and Bluetooth for wireless data transfer, and it has a USB 2.0 port for connected data transfer. In addition, two built-in microphones provide directional audio. $499.99. 360fly.com

The midrange market segment is getting particularly strong. Cameras in this category are capable of creating high-quality VR video. However, the final result can still be somewhat distorted since most of them come equipped with multiple wide-angle fisheye lenses (not as wide angle as consumer cameras, but still wide angle).

One model that falls into this category is the Insta360 Pro. It has very high resolution, up to 8K. Its resolution is actually an exponential increase over 4K and standard 2K HD. Each frame contains four times as many pixels as 4K (which the Insta360 is also capable of capturing) and 16 times the number of pixels as 2K. The video content is of a higher quality not only because of the resolution but also because of an integrated stabilization system.

The compact unit is a single spherical ball with six lenses, for 360º horizontal coverage. Content can be captured in 2D and 3D. The standard capture rate for 8K and 4K resolution is 30 fps. But at 4K, it’s possible to capture video at up to 100 fps. Videos captured at standard frame rates can be stitched together in-camera. High frame-rate video has to be stitched together on a computer via software.

The unit has built-in Wi-Fi for remote control capabilities via a tablet or smartphone. Content is stored on SD cards. Connectivity options also include an HDMI port, a high-speed USB-C port and an Ethernet data port. And there is a 3.5mm plug for audio input. $3,499. insta360.com

Another model in the same price range is the VideoStitch Orah 4i live streaming, fully spherical, 360º VR camera. It is designed around four individual fisheye, f/2 lenses, each with a 170º field of view. The lenses work with four paired microphones to record 4K video (4,096×2,048) at 30 fps and Ambisonic 3D audio.

Post processing of captured data is handled off-camera. The Orah connects to a dedicated processing box developed around an Intel CPU and NVIDIA GeForce graphic processing unit via an Ethernet cable. The camera’s four video streams are stitched together using its own customized version of VideoStitch’s Vahana VR software. It can be stored on SD cards or streamed live. There are a number of other connectors, including four USB 3.0 ports, two USB 2.0 ports, dual gigabit LAN, and mic and audio connectors. With a compact, all-metal body, the Orah 4i also supports Wi-Fi and Bluetooth. $3,595. orah.co

At the high end of the spectrum are systems like YI Technology’s Halo Jump camera. Google is the elephant in the room in any market it enters, and it has entered the VR camera market in a big way with its Jump technology. Google’s professional VR video solution provides high-end automated multi-stream stitching. Cameras designed for the Jump system utilize Google’s Jump Assembler to produce high-end immersive VR. There are a number of companies working with Google that have released or are in the process of developing higher end camera systems specifically designed to work with the Jump Assembler.

One of the first of these is YI Technology and its HALO 3D VR camera. The HALO integrates 17 individual cameras in a horizontal circular ring so it can shoot stereoscopic 8K resolution at 30 fps, or 5.6K video at 60 fps. It can be controlled remotely with an Android smartphone through Wi-Fi.

Captured VR video can be monitored on the smartphone’s screen, and data is stored on microSD cards. Relatively lightweight for its configuration, at 8 pounds, HALO can be mounted to most tripods. It comes bundled in a Pelican 1610 case with two spare cameras and accessories. $17,000. yitechnology.com

The OZO+ is a single, fully spherical camera designed for simplicity of use and exceptional VR. While it looks a little like a consumer camera, at almost 10 pounds it’s larger and heavier than consumer models. The camera is designed around eight 2K sensors (lenses), each with 195º overlapping coverage. Thus it provides total coverage of 360ºx180º and video at 30 fps. It’s also capable of capturing 4K-per-eye stereoscopic 3D video. To complete the VR experience, the OZO+ features stereo and 3D spacial sound, driven by eight microphones, for audio coverage synced with headset orientation.

Captured data is stored and processed internally. A single integrated 500GB memory cartridge and battery makes it easy to swap out power and data storage. And its Wi-Fi remote lets users handle all controls off-camera. Additionally, captured audio and video can be monitored in real time via a VR headset. Because it’s simple to use, is a single unit and provides high-quality VR content, one of the applications Nokia is targeting the OZO+ is for use on drones. $25,000. ozo.nokia.com

There are numerous other 360º VR cameras in the pipeline. Almost all of them have something specific going for them. It’s just a matter of trying to find the right equipment with the capabilities and capture quality required, at the price point that’s acceptable to your imaging customers.