When launched in 2013, the original Theta was the first 360º, single-shot camera, enabling users to express themselves in new, unique ways. The ability to capture 360º still photos and videos redefined photography by giving viewers the ability to control what they see in a scene. In addition, the resulting 360º images were easily shared with others, allowing them to virtually experience a scene as if they were there.

Today, Theta cameras are being used for a broad range ofconsumer and business applications. They range from documenting vacation memories to real estate listings and virtual tours. Moreover, the company expects the rapid growth of virtual reality (VR) and the emergence of social media services supporting 360º images will drive demand for Theta cameras.

“The Theta V represents a number of breakthroughs in 360º imaging, all geared to make it easier for anyone to capture and get the most out of their 360º stills and videos,” said Kaz Eguchi, president, Ricoh Imaging Americas.

“We are proud of the Theta V, and expect consumers and businesses alike will benefit from our new camera,” Eguchi added.

Retaining the slimline design of previous Theta models, the Theta V is lightweight, compact and designed for ease of use. Enhancements include a new image sensor and processor for improved image quality. They are engineered to allow the camera to produce more realistic “as-if-you-were-there” 360º content.

The Theta V can connect to and be controlled by any Android/iOS smartphone or tablet using the Theta S app. Connection can be via Bluetooth low energy (BLE), which enables an “always-on” connection between a camera and phone. Or it can be through

Wi-Fi, providing users with greater flexibility in how they wirelessly control the camera and upload images through the app.

A notable feature is the ability for Ricoh to create new functions for the Theta V via software plug-ins. The first of these plug-ins was developed by Ricoh and is already integrated. It enables the Theta V to deliver the first remote playback capability in a commercially marketed, fully spherical camera.

Using a compatible wireless display adapter, it’s possible to mirror playback of 360º images and video data stored on-camera. This allows users to enjoy 360º video on a large screen monitor or via a projection display. 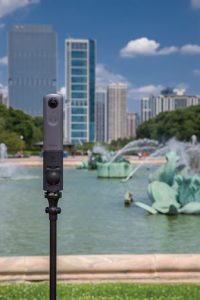 Moreover, the underwater case TW-1 will permit use of the Theta V  at  depths of nearly 100 feet. It will be released in October. The case also works with the Ricoh Theta S and SC.