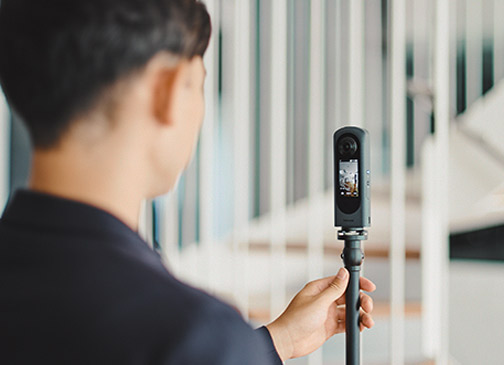 Parsippany, NJ—Ricoh Company, Ltd., introduced the Ricoh Theta X into its line of 360º-capable cameras. The Theta X shoots immersive still images and videos in a single shot. It also boasts many firsts for the brand; for example, a large touch screen; an interchangeable battery; as well as an external memory card.

“Since Ricoh Theta released the world’s-first 360º camera in 2013, it has been utilized in a wide range of fields to expand the possibilities of photographic and video expression,” said Shinobu Fujiki, general manager of Ricoh Company’s Theta Business division. “The pandemic caused an even greater need for immersive imagery as well as virtual tours to boost business efficiency.

“As we strive to meet the needs of our customers through the innovation of our digital devices and services, this camera is designed to help streamline workflows and also deliver high-quality imagery for business users and consumers alike.”

The Theta X’s most innovative feature is a 2.25-inch, color touch display. Moreover, the display makes stand-alone camera use easier by reducing the need to connect to a remote control or smartphone app.

Subsequently, without using a smartphone, users can preview the scene before capture; adjust shooting settings; as well as view captured images. In addition, a touch shutter function enables users to take photos by tapping on the touch screen in addition to pressing a shutter button.

Notably, its CMOS image sensor, main processor as well as lens design were all renewed. The new sensor has approximately 48 megapixels; this makes it possible to capture 360º still images with a maximum output of 60MP.

Further, two image sizes are available to match the scene: 11K for bright-light indoor photography; and 5.5K to capture images in other scenarios. In addition, enhanced image stabilization realizes more vivid and smooth shooting for 360º videos captured at a 5.7K-equivalent of 5,760×2,880 pixels at 30 frames per sec.

Other first-time functions include an interchangeable battery and an external memory card (microSDXC). The company also sells the rechargeable DB-110 battery separately as a spare battery.

In addition, smartphone connectivity was also improved. Consequently, there is no longer a need to enter an SSID when establishing a Bluetooth connection. Furthermore, the camera transfers content to a smartphone 1.5x faster than cameras with incorporated MIMO (Multiple Input Multiple Output) that communicate using antennas.

The Theta X also boasts real-time stitching capabilities with stabilization, removing the need to stich videos. As a result, the processing time of 360º videos on computers is drastically improved.

Like other Theta models, it also utilizes an Android-based OS. This allows third-party developers to create applications (plug-ins) to expand the camera’s function. The Theta X’s larger touch-panel monitor also extends the scope for plug-in development.

It is also now also possible to set up client mode (used to directly connect the camera to a wireless router) without using a smartphone. This enables users to install plug-ins as well as update firmware by operating the Theta X without a computer or smartphone.

Another user-friendly function is time shift shooting mode, which lets photographers capture an image without being in the frame. In addition, continuous shooting mode captures 20 images per second (5.5K).

Other features include selectable image playback orientation; AI auto, which utilizes AI recognition to identify captured subjects and display from that point; users can adjust exposure compensation and white balance with the camera before livestreaming; various shooting modes (still image, video, custom settings, livestreaming, plug-in) selectable via a mode button on the camera; built-in GPS; and a USB Type-C port.

Keeping in line with the original product concept, the camera sports a compact, lightweight magnesium alloy body with a metallic gray finish. The Ricoh Theta X will ship starting March 2022. It will have a suggested retail price of $799.95.