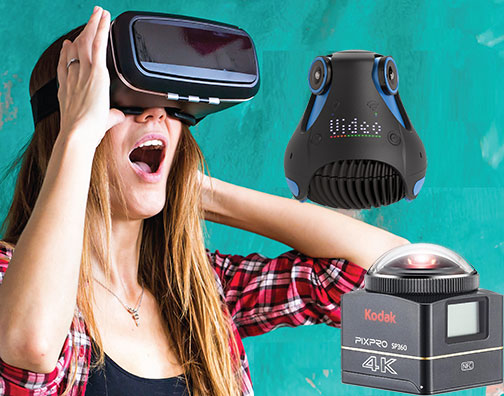 Sophisticated cameras with multi-imaging sensors and complex multi-camera arrays are being coupled with even more sophisticated software. The software stitches the individually captured video streams together to come up with comprehensive 360º, immersive visual environments that are viewed on specialized devices.

Virtual reality is generally paired with AR (augmented reality). AR is a live direct or indirect view of a physical, real-world environment whose elements are augmented by computer-generated sensory input, such as sound, video, graphics or GPS data. In effect, AR enhances a user’s perception of reality. VR and AR complement each other and can enhance a viewer’s immersive experience.

Until this year, VR was pretty much on the fringe of photography. But there’s a big push on to make it more mainstream and take it from being just a tool for professional content development to a casual consumer application. One group that’s making a significant effort to expand VR is the International Virtual Reality Photography Association. IVRPA members are photographers who create and produce 360º panoramas and other virtual reality content. This content includes 360º video, virtual tours and high-resolution panoramas. 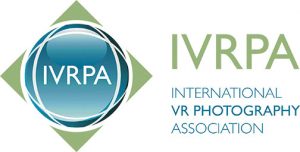 Its annual convention in May drew a lot of interest from professionals and consumers alike. In September, the group sponsored Digility, the first VR/AR Conference and Expo, as part of photokina.

While the VR/AR market is growing rapidly, just how fast it’s growing and how large it will be over the next decade is still open for debate. According to the research firm IDC, that market will generate $5.2 billion in sales in 2016. IDC expects it to grow exponentially to $165 billion by 2020. The VR/AR consulting firm Digi-Capital released a somewhat lower sales forecast earlier this year of $120 billion by 2020.

Goldman Sachs Research has an even more conservative projection. That firm expects the market to reach $80 billion by 2025, which is roughly the equivalent of what the desktop PC market is today. Of the overall VR/AR market, AR currently accounts for a very small percentage. But it’s expected to grow more significantly than VR. It’s forecast to account for anywhere from 50% (IDC figures) to 70% (Digi-Capital figures) by 2020.

According to Heather Bellini, Business Unit Leader, Telecommunications, Media and Technology, for Goldman Sachs, VR/AR will have a major impact on consumers and businesses in the years to come. She noted as part of her report, “We think [virtual reality and augmented reality] have the potential to transform how we interact with almost every industry today, and we think it will be equally transformative both from a consumer and an enterprise perspective.”

A number of major companies are betting big bucks on VR/AR. Facebook, for example, paid $2 billion for Oculus, one of the leading VR goggle manufacturers, and Google put up close to $550 million of the $4.5 billion that Magic Leap recently raised. Magic Leap is a start-up company that is working on a head-mounted virtual retinal display that superimposes 3D computer-generated visual data over real-world objects by projecting a digital light field directly into the eye. Very sophisticated stuff.

What’s making the push toward consumer VR possible is the dropping cost of the technology. More and more companies are producing the increasingly affordable cameras, software and viewing devices that are required to come up with a virtual reality experience. Prices for the various pieces of equipment involved are coming down to the point that even most casual photographers can afford to get involved.

This action camera features a single 360º hemispherical lens. It’s advertised as a “360º spherical lens” but that refers to the horizontal coverage, not vertical. Vertically, it provides 235º coverage. In order to come up with full 360º coverage, it has to be paired with another unit in what the company calls the Dual Pro pack. The two data streams are merged together with the company’s Stitch software, which comes bundled. The Dual Pro Pack sells for $799.99.

SP360 images are captured on a 16MP sensor. For high-speed photography, it can capture up to 10 frames per second at 10MP resolution. Like many VR cameras, it can be controlled directly from iOS or Android smartphones. And, like most VR cameras, it supports Wi-Fi data transfer capabilities. It also includes NFC (Near Field Communication) transfer capabilities. kodakpixpro.com

At $200, this is probably the least expensive VR camera on the market. The dual-lens camera takes remarkably good VR images, particularly for its price.

It includes two back-to-back lenses, each with a 13MP sensor. In addition, it captures VR images to its 4GB of internal memory or to a removable microSD card. Data can be transferred either through Wi-Fi or Bluetooth. lg.com

The 360cam is somewhat more expensive but also more sophisticated. The little alien-head-looking camera offers a wide range of functionality. Instead of just two lenses, it has three. Each has a 185º field of view, capturing 4K still images with 360ºx300º coverage. It has a microSD slot for internal data storage and wireless data transfer for rolling data off of the camera.

Unlike some multi-lens VR cameras and camera arrays, which require special software to stitch data streams together, the 360cam handles data stitching itself. It not only has the expected rechargeable battery, it supports replaceable batteries in its removable battery base. This makes it possible to shoot all day long without having to wait to recharge. It’s also waterproof down to 30 feet and includes GPS capabilities—all for $500. us.360.tv/en

GoPro’s Omni camera array and the like are another option for VR. But they can still be on the pricey side, even when they utilize consumer cameras. There’s the price of the array itself and there’s the price of the individual cameras. GoPro’s Omni six-camera synchronized array rig, for example, is priced at $1,499.99. That does not include the Hero4 Black cameras required to populate it. The all-inclusive package for the array with six cameras and bundled with the company’s Kolor software suite has a list price of $4,999.99.

Each of the little GoPro cameras can capture 12 megapixel images at 30 frames per sec. As a result, the quality of the VR the array captures is substantially better than what a single- or dual-lens camera can take. Even though the Hero4 is a consumer camera, the Omni array costs are beyond the budget of most consumers. gopro.com

At this point, the quality of affordable consumer VR is still marginal, particularly with cameras that utilize a single superwide angle or two hemispherical coverage lenses. It’s also unlikely that the general public will fully accept VR as a photographic alternative until the captured and stitched together images they see in their viewers actually resemble the real world around them. That won’t be until the quality of VR images generated by consumer models comes close to the output quality of a system like the Omni, but at a much more affordable