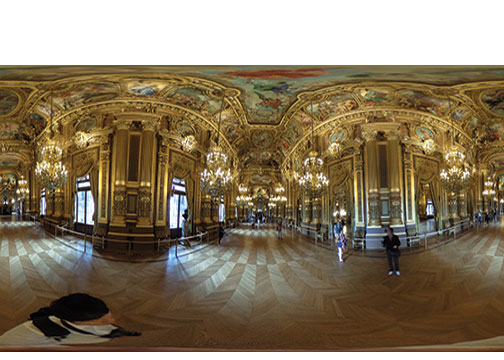 The world of photography is on the cusp of a dramatic turn. 360º photography—controlled panoramic images that surround the original point where the shot was taken—is becoming more sophisticated and less expensive. 360º/VR cameras now range in price from a couple of hundred dollars to several thousand. There are also mobile apps that let users capture 360º images with a smartphone. Let’s take a well-rounded look at the world of spherical imaging.

New markets are emerging: landscape photographers, Realtors, gamers, travelers and many others are just starting to explore the possibilities of 360º photography. Virtual tours of buildings, destinations and sports venues are starting to pop up, hosted by both specialty web services for business clients and more common image-sharing hubs like Flickr for hobbyists and enthusiasts.

According to Research and Markets, the global 360º camera market is expected to grow more than 35% over the next three years. Some companies, such as Ricoh Imaging, hint that the market may be expanding even faster. “We expect 2017 to see double sales in this category,” notes Ricoh’s Ken Curry. “There is a lot of opportunity here.”

In the realm of video, some 360º cameras are capable of live streaming. Viewers can move their cursor or use their fingers to move the camera right or left, up or down, as the information is being downloaded live on their computers. This is creating a new, immersive experience that involves the viewer. VR headsets and smartphone “goggles” are also helping to drive interest in 360º cameras and related hardware and software.

“The quality of the experience has improved,” says Curry. “More consumers are seeing the results, and this is driving interest in purchasing their own 360º cameras.”

Several 360º-capable video cameras, such as the Kodak PixPro SP360 or original Samsung Gear 360, both priced in the consumer-friendly mid-$200 range, are being used by a growing number of consumers to document their lives. “Someone can bring their Ricoh Theta S to dinner, put it in the center of the table, take a 360º image of the dinner and later share it with their friends on Facebook,” notes Curry.

The ability to capture the environment they are in and share it with friends and family is a key selling point. Another area of interest is group selfies and social activities. Because of its superwide-angle point of view, a 360º camera can capture large group portraits. Someone can even join a party from a remote location and feel part of it via the immersive image.

A prime area of growth is where 360º image capture merges with the world of virtual reality (VR). Virtual theme parks are often based on still images but go into a simulated world that can be viewed on VR headsets.

Research and Markets predicts “increased penetration of VR headsets is going to increase the market for 360º cameras.” They expect high growth potential for these cameras as interest in VR gaming increases. In 2015, approximately 1.8 million VR headsets were shipped. That number jumped to 9.5 million last year, and fast growth is expected to continue.

While cameras in the $250–$350 range are gaining greater acceptance among consumers, those cameras as well as pricier, more specialized systems are available for a wide range of business applications.

One key example is the Matterport system. This $5,000 camera/scanner, along with an iPad app, scans and maps a residential or business property for online real estate listings based on high-res stitched images. The images are linked together so viewers can “walk” through a property using an interface similar to Google Street View. Some photo/video real estate services using the Matterport system report that Realtors are experiencing faster sales in listings that include Matterport-based 3D “virtual tours.”

However, one needn’t spend $5,000 on the Matterport system or the similarly priced GoPro Omni kit. Ricoh made sure their Theta system was built on an open source API. Consequently, third-party developers can create programs that would further enhance the product’s usefulness. HoloBuilder and YouVisit are third-party solutions for 3D home tours using the Ricoh Theta system. Thanks to this open-source approach, there are a variety of apps available on almost all smartphones.

Another business application of 360º imagery is used car sales, where dealers place the camera inside the car to capture a full circular view of the interior. And one solar panel installation company is using Ricoh Thetas, hoisted on long sticks, to inspect roofs of properties in order to determine where the panels need to go. Proprietary software helps them map the roof for the most efficient installation.

Another B2B application is with HVAC installers. 360º cameras are being used to inspect the inside of air conditioning ductwork to help facilitate cleaning in a more cost-efficient manner.

An important message for photo retailers is that 360º imagery is a growing market with opportunities for sales not just of cameras but also accessories. Monopods with feet, for example, are a good add-on sale since a true 360º camera would show the tripod it is mounted on; a monopod with feet would be less obtrusive. Selfie sticks are also a possible add-on, especially for consumers using the cameras for travel or social situations.

Some retailers are also encouraging sales staff to download software and apps related to the lines of 360º cameras they sell so they can familiarize themselves with the product. “Interactivity is key,” says Ricoh’s Curry. “It is important to show the consumer that 360º cameras are different and unique, and not something they currently have in their camera bag.”

Jim Malcolm, general manager, North America, for Humaneyes Technologies, goes even further. The company’s Vuze is marketed as a 3D, 360º VR camera. “For the most part, VR camera buyers don’t know what they don’t know. Therefore, a good virtual reality demonstration on your selling floor is essential. Unlike 2D cameras such as the Samsung Gear 360, Ricoh Theta and Nikon KeyMission, which can be demonstrated on a video monitor, virtual reality (3D, 360º spherical) video must be experienced on a headset. Your customer is most likely to buy immediately after seeing 3D, 360º video via a headset for the first time. So that two- or three-minute headset demonstration is the most convincing trigger to purchase within your store.”

Here’s a quick product roundup of 360º-capable video cameras that will appeal to your customers. The number of 360º cameras in the popular sub-$500 category has grown in the last year. This is a partial list of what’s available now.

The Ricoh Theta S stitches two 180º images together, offers live streaming and movie clips up to 25 minutes. The Ricoh Theta SC offers similar features for fully spherical photos and video but just 5-minute movie clips and no streaming. (At press, Ricoh was showing a prototype of a 4K-resolution Theta at NAB.) ricohimaging.com

At the lower end of the line, the PixPro SP360 records 360º of HD video. Like the rest of the PixPro action cam line, it is shockproof, freezeproof and water resistant. The PixPro SP360 4K VR camera steps up to capture 4K video and still sell for less than $500 (it takes two together to produce true, fully spherical video). Coming soon, Kodak’s Orbit360 4K camera is an all-in-one 360º, VR camera with two fixed-focus lenses that capture full 360º, 4K video that can be uploaded to social media platforms. It will retail at around $499. A host of accessories and mounts are offered for these cameras as add-on sales. kodakpixpro.com

At the top of the KeyMission lineup, this waterproof (to 98 feet), freezeproof and drop-protected cam is one of the most rugged action/adventure 360º cameras available.

This water-resistant, headset-friendly VR camera captures 4K video, although the captured image is not quite 360º for up and down. 360fly.com

At just under $200, this pocketable, spherical camera is a top value for budget-minded spherical fans. It only provides 2K video but does offer 5.1-channel surround-sound recording. lg.com

Weatherproof and capable of true 360º image capture, this camera is fully compatible with Samsung smartphones and VR headsets.

The updated Gear 360 offers real-time content sharing at 2K resolution. Pricing has not yet been announced. samsung.com

If your customer has an iPhone 6 and up, the Insta360 is fully compatible. And it comes with a pair of VR goggles.

The device clips onto an iPhone to transform it into a 360º, VR camera capable of one-touch sharing as well as live streaming. insta360.com 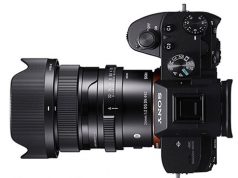