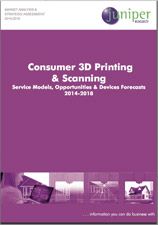 While 3D printer shipments currently are at relatively low levels, Juniper expects them to increase significantly beyond the five-year period. 3D industry leaders, including 3D Systems and Stratasys (which owns MakerBot), confirmed a stronger demand for professional 3D printers and materials compared to a softer consumer demand.

However, the Juniper report notes “the entry of HP and Epson into the professional market, along with the development of an appropriate ecosystem of software, apps and materials, will further educate the mass market.”

Additionally, the new study finds that similar to the mobile device ecosystem, content will be critical to the success of consumer 3D printing. “While there has been an increase in awareness of 3D printing, it is still—and will continue to be—a niche consumer technology. In order for 3D printing to successfully find a mainstream market amongst consumers, it needs to widen the applications available that integrate consumer lifestyle and drive a number of applications beyond professional printing,” report author Nitin Bhas stated.

This broad-spectrum approach can be achieved through the creation of an app or online portal for connecting to the cloud and enhancing the functionality of the 3D printer via content. This has already been done by MakerBot via its Thingiverse and MakerBot Digital Store. The MakerBot 3D ecosystem drives accessibility and adoption of 3D printing through Thingiverse.com, the MakerBot Digital Store, the MakerBot Retail Store, partnerships with specialty retailers such as B&H Photo-Video, and now the new MakerBot Mobile app, which gives users the power to monitor and control a MakerBot Replicator desktop 3D printer and access all things MakerBot from a mobile device. The app uses the power of cloud computing to access a user’s personal 3D printing library as well as Thingiverse—the company’s 3D design community for printing and sharing 3D models, with more than 200,000+ downloadable digital designs of free 3D models.

Other key findings of the Juniper Research report include:
· U.S. and Europe are ahead in terms of consumer 3D printer adoption, driven by hobbyists and early tech adopters.
· Retailers such as Staples are testing in-store 3D printing services for providing a unique experience to their customers away from buying the hardware and spending on materials.

Juniper’s research is backed by other recent studies on the 3D printing marketplace. According the Consumer Electronics Association (CEA), the owner and operator of the International CES trade show, the 3D printing footprint at the 2015 International CES will double from the 2014 CES. And according to CEA’s most recent U.S. Consumer Electronics Sales and Forecast report, sales of desktop 3D printers are expected to reach 67,000 units in 2014, earning $76 million in revenue, an increase of 43% over 2013.

Consumer 3D Printing & Scanning also identifies the key market drivers and hurdles based on recent market activities and developments across the value chain. Several business models exist in the marketplace to monetize 3D printing, and these are defined to an extent by the way a consumer approaches 3D printing. Revenues may be generated for companies involved in the device/hardware market through the sale of hardware, accompanied by software, and via material sales. And retailers can partner with 3D printer makers to offer the services in their retail environment. juniperresearch.com