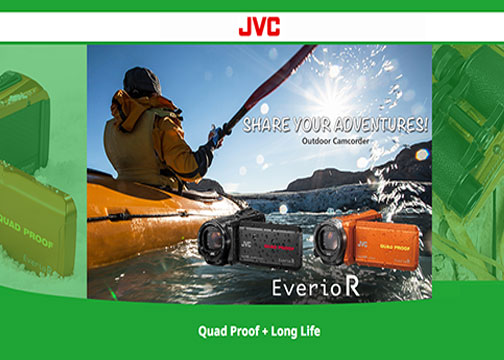 Wayne, NJ—JVC added two rugged, weatherproof camcorders that can endure foul weather, get bounced around and still be ready to shoot. The Everio R camcorders’ all-weather features, five-hour battery life and long optical zoom lenses give consumers the opportunity to create video that can’t easily be captured with a smartphone, JVC announced.

The two camcorders, the GZ-R550 and GZ-R440, boast the company’s quad-proof structure. They are water resistance to a depth of 16.4 feet, can withstand a drop from 4.9 feet, are dustproof and also freezeproof down to 14°F. They can also operate in temperatures as high as 104ºF. In addition, the camcorders can float.

JVC’s Everio R camcorders are geared for outdoor enthusiasts who want to capture high-quality video when skiing, hiking, boating or enjoying any outdoor activity where the use of a smartphone is too risky. They’re also ideal for family situations that can be dangerous for a smartphone, like poolside fun. Adding to their versatility, they can record with the 3-inch LCD monitor closed, useful, for example, when mounting the camcorder to a bicycle.

Contributing to the camcorders’ water and dust resistance is their internal high-capacity batteries, which eliminate the risk of damaging the camera while changing batteries in wet weather. Moreover, the camcorders are compatible with third-party portable batteries—the type used for charging smartphones.

The camcorders also offer performance capabilities for those who want to take their videos beyond what a smartphone can deliver. They employ a large-caliber Konica Minolta HD lens with 40x optical zoom and 60x dynamic zoom that is said to maintain the picture’s HD resolution.

Moreover, slow motion playback is activated by tapping the screen. Another feature is time-lapse recording. Plus, a zoom position memory function returns the camcorder to a preset zoom position. This is convenient when shooting sports events. Also featured are: intelligent auto mode, face detection and touch AE/AF.

The GZ-R440 provides 4GB of internal memory and comes in matte black or orange. Both include SD/SDHC/SDXC memory card slots.