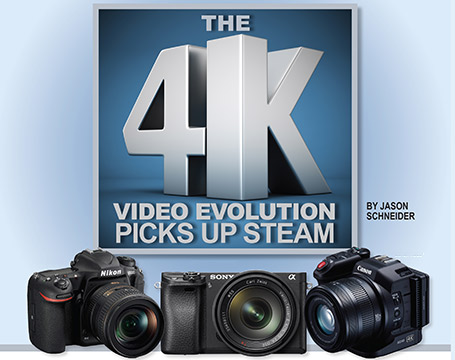 More pros and serious enthusiasts are now enthusiastically embracing video. And ultrahigh-resolution 4K—long hailed as the coming video standard—is now really starting to take over. For many consumers, Full HD 1080p video is no longer enough, and one of the hallmarks of a state-of-the-art DSLR, mirrorless camera or action cam is 4K recording capability.

Significantly, many of the latest entries provide 4K video capture at 30 and even 60 frames per second (fps). They now deliver far superior, more viewable 4K video than the 15-fps spec common on some previous 4K cameras and action cams.

The benefits of 4K capture—greater detail and a more immersive experience—can be seen even when a 4K video is output in Full HD 1080p. However, you really have to view the unmodified original on a 4K device to experience the spectacular image quality, virtual lack of distortion and brilliance possible with UHD 4K.

The good news is that the prices of 4K-compatible TVs and video projectors continue to edge downward. Not too long ago a 4K TV could set you back $5K or more. You can now purchase a 40-inch 4K TV for just under $750. But to really appreciate the 4K difference, consumers will probably want to opt for a 65-inch model selling in the $1,200–$1,700 range.

4K video delivers roughly four times the resolution of Full HD 1,920×1080 video. The 4K format used in most cameras recording in the 16:9 HD aspect ratio does not actually provide a resolution of 4,000 pixels measured horizontally—the nominal definition of 4K. It is technically UHD (Ultra High Definition), which provides a resolution of 3,840×2,160 pixels, or a total of around 8.3M pixels. However, that is certainly sufficient to deliver spectacular image quality that will blow Full HD 1080p out of the water, even if it’s not quite the equivalent of the 4,096×2,160-pixel (4:3) DCI 4K format used in digital film production.

While 4K is clearly destined to be the video resolution standard going forward and to remain so for quite awhile, here are some pros and cons to consider when explaining the advantages and limitations of 4K video to your customers.

4K Pros
1. 4K video captures a greater number of pixels, resulting in greater detail and sharper images. This is true even when reduced to Full HD 1080p for more convenient sharing and presentation.
2. 4K video is essentially a “future proof” system. In other words, if you shoot a project in 4K now and convert it to HD for viewing on your present system, you can always reexport it from the source files to deliver superior 4K video in the future.
3. Since 4K video files capture more information, there are more pixels to work with in postproduction. This enhances the flexibility of adding digital effects seamlessly or reframing and editing a shot without any noticeable loss in image quality.

4K Cons
1. 4K image files contain more data and require more storage space. Consumers may, therefore, have to increase the storage space on their computers or purchase an additional external hard drive.
2. 4K video files require more processing time and/or faster processing systems and may bog down a user’s present system, even if it was adequate for Full HD video. The good news is that most current editing software provides 4K support and late-model computers impose fewer workflow constraints.
3. It’s still necessary to spring for a large-screen 4K TV, monitor or projector to view videos shot in 4K, to get the most out of them. However, as mentioned, availability of these items is increasing and prices are generally coming down.

It’s also worth noting that an increasing number of outfits like Netflix and Sony are now offering more first-rate, prerecorded 4K content.

To give dealers an overview of what’s out there now in 4K Land, here’s a concise selection of current cameras, camcorders and action cams with cutting-edge video capability.

Sony Alpha a6300. It’s the spitting image of its successful predecessor, the a6000, which continues in the line. But this 24.2MP, APS-C-format camera with a CMOS sensor and Bionz X processor offers a lot more for video shooters. It records UHD 4K video at 30/24 fps and 1080p video at up to 120 fps. It also offers pro video functions like an enhanced Zebra function, S-Log gamma for wide dynamic range and S-Gamut for a wider color space. Other features include: full-res RAW bursts of 11 fps; a 4D focus system that combines 425 wide-area, phase-detection points with 169 contrast-detection points; ISO settings up to 51,200; a 2,359K-dot OLED EVF; a 3-inch, 921,6K-dot, tilting LCD monitor; and Wi-Fi/NFC connectivity. $1,000.

GoPro Hero4 Black. The flagship of the iconic Hero action cam line captures 4K UHD (3,840×2,160) video at 30, 25 and 24 fps, as well as 2.7K (2,704×1,520) and Full HD video at various frame rates. It also records HD 720p video at up to 240 fps for super slow motion movies. It can shoot 12MP stills at burst rates of up to 30 fps. Its ultrawide-angle glass lens provides a SuperView option, and its camera housing is waterproof down to 131 feet. Other features include: Wi-Fi and Bluetooth connectivity; video and photo time-lapse modes, including night lapse; multishot mode; a Protune mode for manual control of white balance, color, ISO, sharpness, shutter and exposure values; one-button operation with QuickCapture; and auto low light mode. $499.99. gopro.com

Sony FDR-AX100. This portable camcorder boasts a foldout, 3.5-inch LCD and wide-view, 0.39-inch, 1,440K-dot OLED Tru-Finder EVF. It records UHD 4K video at 24 and 30 fps and Full HD 1080p in XAVC S or AVCHD formats at the same time as it records web-optimized MP4 video. It can also capture 10.6MP photos. Its 1-inch, 14.2MP Exmor R CMOS sensor is coupled to a Bionz X processor. A 29mm, wide-angle Zeiss Vario-Sonnar T* lens covers a 12x optical zoom range and has an 18x clear image digital zoom function (in 4K). Other features include: Optical SteadyShot IS with active mode to provide three-way shake canceling plus electronic roll stability; built-in ND filters; Wi-Fi/NFC to enable seamless file transfer; and an included RMT-835 remote commander. A lens ring enables smooth adjustment of focusing or zooming depending on which mode is select via a convenient button. $1,699.99. sony.com

*All prices are body only unless otherwise specified.