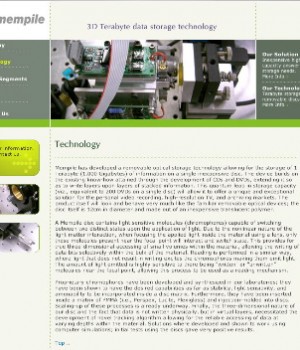 An Israeli software company called Mempile has devised a CD-sized disc, a consumer storage product that it believes will one day be able to store a terabyte (1000 gigabytes) of information.

The product, known by the brand name TeraDisc, will be capable of hosting up to 250 hours of programming. When the product is released in 12 to 18 months, it will have 500GB of storage space — about ten times what is held by a Blu-ray disc — and Mempile expects to expand to a full terabyte about a year later, Beth Erez, Mempile’s vice president and chief marketing officer, said in an interview with Picture Business. The TeraDisc will be sold as a standalone storage mechanism under that name. However, the software will not be used for any sort of entertainment content distribution, such as as a competitor to Blu-ray or HD-DVD.

“We will compete with them in one aspect,” Erez said- as a storage and archival mechanism. She cited a lack of interest by the entertainment industry in such massive single-disc storage. However, Mempile does plan to enter “partnerships” with various electronics companies, starting with computer manufacturers. “We don’t see ourselves trying to compete with Sony, Panasonic, or disc manufacturers,” she said. “We’re working with some of them.”

The technology works by developing “layers” of standard DVD technology on to a single disc, which will look like a normal CD but possibly be thicker. At a recent presentation in Japan, Mempile showed that the disc can record and read 100 layers, Erez said, and they next plan to show that they can record 200 layers.

The company plans to eventually expand beyond one terabyte, but the technology itself has a ‘physical limit’ of five terabytes.

Erez says users of the disc as “being able to download movies, DVDs, pictures, archives — everything that you want to store.” The company has thus far raised $32.5 million worth of venture capital.