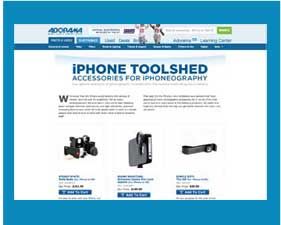 New York, City, NY—With the iPhone 4S delivering 8 megapixel still capture and 1080p Full HD video, the lines between smartphone image quality and point & shoot are being to blur, opening a whole new world of iPhoneography. But savvy cell phone shooters, even those who extol the omnipresence and convenience of their beloved iPhones, are discovering that the sleek do-everything devices have some frustrating limitations when it comes to serious picture taking. Enter Adorama’s iPhone Toolshed—“a special selection of photographic inventions for the works most ubiquitous camera.”

Adorama Camera, the New York City-based mega photo specialty retailer, is increasing its web presence with the launch of its iPhone Toolshed—a website dedicated to selling picture-taking accessories for the iPhone, including HD video accessories. Among these are grips, remotes, tripods, how-to guides and high-quality optics—including Schneider Optics’ iPro lens system, which includes a four-element, 19mm-equivalent wide-angle and a three-element, 165º fisheye lens.

“Who knew that the iPhone would become the camera of choice—and not just for snapshots—for so many photographers? We sure didn’t,” announced the site. “Here we’ve been blabbing about compact cameras’ pixel counts, low-light sensitivity and ever-increasing feature sets, when all most people seem to want is a simple camera that they’re sure to have with them when a picture presents itself.”

As iPhoneographers are realizing, the iPhone is not without its limitations as a camera, and that has spawned countless photographic accessories to increase its picture-taking abilities—a trend the savvy New York retailer is now catering to. Many of the products at the iPhone Toolshed are also compatible with the iPhone 4 as well as the 4S.

Adorama’s handpicked choices feature highly practical items for both still photography and video, including: Belkin’s LiveAction camera grip that allows the iPhone to be held just like a normal compact camera; Cineskates, a combination of flexible tripod and skateboard wheels that permits the iPhone to shoot rolling, high-def video clips; the Kogeto Dot, which enables the iPhone to capture 360º immersive video that can be played back on an iPhone or computer; the Glif, a formfitting holder that permits the iPhone to be mounted on a tripod; and the Olloclip, a tiny optical hub that slips right over the lens corner of the iPhone to endow the device with wide-angle, fisheye and close-up optical options. adorama.com/iphonetoolshed 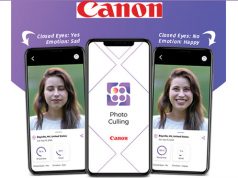