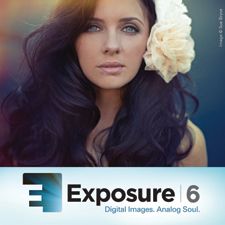 Raleigh, NC—Alien Skin Software announced the forthcoming launch of Exposure 6, the latest version of its flagship photography effects software. Exposure 6 is enhanced to enable digital photographers to achieve accurate analog film emulation and creative effects in a simpler interface. It can be used as a plug-in with popular host software or as a stand-alone program.

Exposure 6 is designed to bring all the creative tools of the traditional darkroom to digital photography, such as the look of discontinued films, printing techniques and borders and textures. Classic films like Kodachrome, Polaroid and Tri-X were carefully analyzed to simulate their characteristic tonal ranges and grain structures. Over 450 preset effects can be applied with a single mouse click, and Exposure 6 integrates both color and black-and-white processing.

“With Exposure 6, not only have we worked to enhance the rich feature set available to photographers, but also to streamline the software to help them focus on creating extraordinary images faster than ever,” said Alien Skin CEO’s, Finley Lee. “It’s about helping photographers realize their artistic vision as quickly and easily as possible.”

Continuing the theme of integration, all the functionality of Alien Skin’s creative focus and lens simulation program, Bokeh, was rolled into Exposure, thus eliminating the need to jump between programs. As a result, Exposure now provides tools for photographers to draw attention to their subject by manipulating focus, vignette and depth of field. From fast lens simulation through to tilt/shift and motion blur looks, Exposure 6 offers an array of creative options.

In addition, based on user feedback, Exposure 6 offers many more options to apply border and texture overlays. It includes new lighting effects, such as realistic sun flare, and vintage borders developed by renowned photographer Parker J Pfister. Users are also now able to import their own custom borders and textures using the built-in importing tool. And sharing and syncing presets, textures and borders across multiple computers is also now easier to do.

Exposure 6 integrates with Adobe Photoshop and Lightroom, as well as Apple Aperture. Alien Skin’s Exposure 6 will be available in June 2014 for $149. Owners of any version of Exposure may upgrade for $69. Free upgrades will be automatically sent to everyone who purchased Exposure 5 from Alien Skin Software in March 2014 or later. alienskin.com