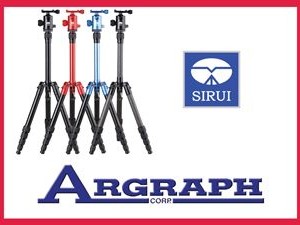 Carlstadt, NJ—Following up on the successful introduction of Sirui Professional Products in 2011, Argraph announced the new Sirui T-0X series of compact tripod kits.

“Photographers have been quite impressed with the quality, stability and performance from Sirui T-series tripods,” said Mark Roth, president of Argraph. “And the latest version provides additional flexibility for tabletop and low-angle shooting.”

The Sirui T-0X tripod kits have a center column that can be removed, allowing users to place the ball head directly on the spider. This converts it into a tabletop tripod. Plus, when the legs are set to the widest angle, it gets as low as 3.9 inches from the ground. The T-0X kit comes with a Sirui C-10X ball head with an Arca-compatible quick-release plate and a soft carry case. For added convenience, the belt clip on the bottom of the tripod can hold a weight bag for added stability.

Sirui tripods are distributed in the U.S. exclusively by Argraph Corporation. As with all Sirui products, the T-0X series comes with a six-year warranty. argraph.com